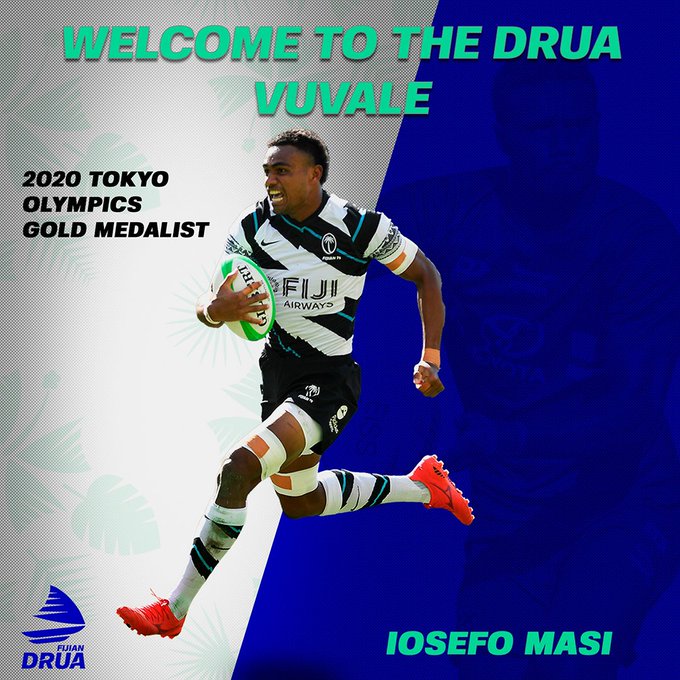 The Fijian Drua have confirmed the signings of prop Mesake Doge and Sevens Gold Medalist Iosefo Masi for the next two seasons.

Doge returns to Fiji from Welsh club Dragons in the United Rugby Championship.

The 29-year-old, who has played eight games for Fiji since making his debut in 2016, previously had stints with Timisoara Saracens in Romania, making 27 appearances, as well as Brive in the French Top 14.

Meanwhile, Masi is the latest player from the gold-medal-winning Tokyo side, joining the likes of Meli Derenalagi and Napolioni Bolaca in making the switch from the seven-a-side format.

The 24-year-old returns after a brief venture with the North Queensland Cowboys in the NRL, named in Fiji’s extended squad for the 2022 Rugby League World Cup.

“Mesake is a highly regarded international and his inclusion will greatly bolster our tighthead stocks,” Fijian Drua CEO Brian Thorburn said in a statement.

“Our young forwards will also benefit enormously from his wealth of experience in European club rugby.

“Alongside Mesake, our fans will of course remember Iosefo Masi for his exploits in 7s. He joins the Drua as an outside back, giving us further options in attack.

“It’s very exciting for our Club to have both these players joining our vuvale.”

The announcements come as Thorburn confirmed they will look to host up to five games in Fiji in 2023.

The club were forced to base themselves on the north coast of NSW to kick off Super Rugby Pacific as a result of COVID before returning home towards the end of the year for games against the Highlanders in Suva and Chiefs in Lautoka.

“What’s even more thrilling is that these players, like the rest of our squad, will be displaying their brilliance right here at home, as we look to bring at least five Super Rugby Pacific matches to Fiji in 2023,” Thorburn added.