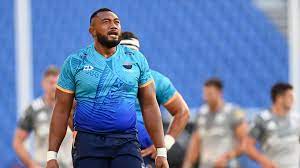 Moana Pasifika and the Blues have confirmed their sides for Tuesday’s clash at Mt Smart Stadium.

It will make the first of two matches between the two teams, making up for their postponed match in round one.

With this in mind, both teams have opted to make several changes from the teams which secured victories on Saturday.

Moana Pasifika have confirmed Samoan international Jack Lam will lead the side with eleven players set to make their Moana Pasifika debut.

This includes prop Abraham Pole, who joins the club as a permanent replacement after filling in for the Crusaders in round four.

It’s a completely fresh back three, with Hawke’s Bay winger Anzelo Tuitavuki and Samoan duo Tomasi Alosio and D’Angelo Leuila all in line for their Super Rugby debut.

“This is a great opportunity for our players making their debut to put their hand up. We have a lot of trust in our squad and these men have all been working incredibly hard,” says coach Aaron Mauger.

“Since we have come back from Queenstown, (Kata’s) level of preparation and training intensity has been outstanding, and he is demanding that of those around him. He is in a good space and ready to go.”

Meanwhile, the Blues will be without Beauden Barrett after his head knock, allowing the in-form Stephen Perofera to start at flyhalf.

There are 12 players in the squad with three Blues caps or less including four who will be on debut.

Veteran lock Luke Romano leads the side, joined by fellow All Blacks Alex Hodgman and Nepo Laulala in the tight five, with Finlay Christie and Karl Tu’inukuafe making his first appearance for the season from the bench.

“It is both a challenge and an exciting opportunity,” said Blues head coach Leon MacDonald. “The situation is simple. You can’t play your most experienced players three times in eight days. It may not by ideal but we just get on with it.

“Both teams have a number of players who have emerged through the Blues Under-18 and Under-20 programmes. We are taking the positive here and really looking forward to it.”

Fijian Drua players happy to be back home