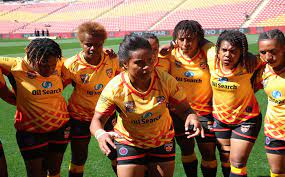 The Papua New Guinea Orchids squad for this year’s Rugby League World Cup (RLWC) in England will feature 11 debutants and just four players who competed at RLWC2017, as head coach Ben Jeffries looks to nurture talent that can represent PNG women’s rugby league at the highest level for years to come.

“It’s exciting that we have several debutants combined with some experienced Orchids players, including a handful that returned from RLWC2017,” Jeffries said.

“Those returning players will be critical for the younger players within the group. The reality is that this could be the last opportunity for some players to represent the Orchids, so the expectation of these players is to assist in nurturing the younger players whilst competing for their positions from game to game.”

“The squad features a majority of PNG-based players (65 percent) coming from three confederates, and among the Australia-based players (35 per cent) we have a combination of players predominantly based in Queensland.

All Australia-based players have been monitored through the Queensland and New South Wales women’s competitions, and it is pivotal to recognise players like Elsie Albert, Shellie Long, Jessikah Reeves and Therese Aiton who have been part of NRLW squads this year, which will assist in creating high standards within the Orchids team.”

“In terms of new talent, we have two exciting young halves in Lila Malabag, who debuted against England in 2019 and Elizabeth Kapa, who came straight out of the schoolgirls’ competition.

They could potentially be long-term halves for the Orchids and will work with the evergreen Shirley Joe, who was the try-scoring hero in the 2019 victory over England.

In addition, dual-code international Joanne Lagona has been a standout player throughout this process and has played in every major PNG-based competition and trial leading up to this selection.”

There are nine stand-by players who will be considered to replace any players who are forced to withdraw from the squad.