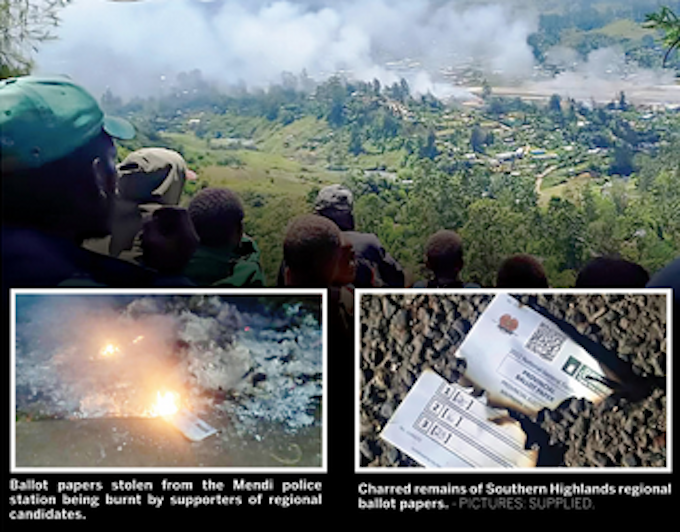 Four prominent leaders are under the Papua New Guinea police radar for their alleged involvement in the Mendi madness last week which left one person dead and thousands of kina worth of properties burnt to ashes.

The four men allegedly allowed their supporters to engage in armed conflict with rival candidates and supporters in Mendi, Southern Highlands over the regional seat.

As fighting continues, four other men were arrested in neighbouring Western Highlands Province with thousands of kina in cash and bullets.

Mount Hagen police, acting on a tip off, arrested the four men who were found to be in possession of K65,400 (US$18,606) in cash and 30 rounds 5.56 bullets including other offensive weapons.

The men were allegedly on their way to Mendi, when they were intercepted by Mount Hagen police at the back of the WHP police headquarters.

Commissioner Manning said that the men are all from Mendi and their vehicle was also impounded at Mount Hagen Police Station.

“I have issued instructions for all Mount Hagen police station police not to allow any visitations,” he said.

“All mobile phones were removed from these four suspects. The suspects were apprehended by the Hagen local Task Force Response Unit just at the back of Mount Hagen Police at around 11.42am on Sunday.

“Enough is enough, we have gone past the stage of negotiations for peace. We are now required to enforce the Rule of Law, and it starts with the list of candidates, we have credible intelligence and sufficient evidence to link them with the ongoing violence in the town of Mendi and surrounding districts.

“Peace negotiations is a short term measure, true lasting peace is when we remove individuals from society and subject them to the rule of law. Only then will we have long lasting peace.

“We will be looking at all facets of the ongoing clashes in Mendi. The source of firearms, ammunition, funding, and any individual or business assets used to support this ongoing clash,” he said.

Macron in the lead, as French Presidential contest impacts Pacific