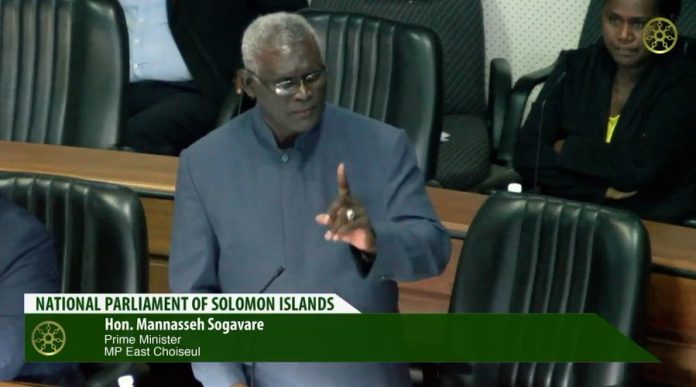 Solomon Islands Prime Minister Manasseh Sogavare has acknowledged those in government that have remained firm despite pressure from rioters for them to resign in the past week.

He said the government stood their ground because they love the country and are the defenders of the country’s young democracy.

Sogavare said the decision not to resign rests on the Constitution of the Solomon Islands, quoting the preamble of the Constitution – which says power is exercised on behalf of the people by elected representatives.

He said he was elected Prime Minister by the Parliament of Solomon Islands, and that is why he resisted calls for his resignation.

Sogavare said he will not bow down under a state of lawlessness because he has done nothing wrong, and still commands the numbers to stay in government.

The Prime Minister said there are those that want to advance their own agenda at the expense of the country. He said the moment we stop defending our values is the day we lose ourselves.

Sogavare said that he will not be removed or resign by Taiwan’s agents, seeking to topple his government.

He said what transpired over the past week was an attempted coup, promoted by foreign agents, and not in the best interest of the country.

The joint operation was initiated to target offenders alleged to be involved in the looting and theft of machinery and tools from hardware stores in the Ranadi industrial and commercial district.

Commissioner Mostyn Mangau said: “The joint operation arrested five suspects in relation to the search warrant and they are in police custody. The suspects arrested include three adults and two minors. Amongst the five suspects is a female in her 30s.”

Commissioner Mangau said police received information from the community that two alleged suspects had buried a large number of stolen properties around their residence.

“Some of the stolen items were generators, chainsaws, electrical tools and consumable goods,” he said.