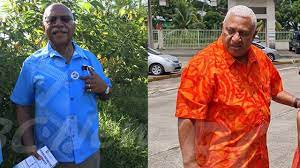 The result app shows that of the 130 voters who voted at the Fiji Police Southern Division Headquarters, Rabuka collected 41 votes, FijiFirst Leader Voreqe Bainimarama secured 32 votes, and the remainder was shared among others.

Bainimarama gained 27 votes from this venue.

Of the 118 votes cast at the Valelevu Police Bure, 42 were in Rabuka’s favor, while 31 were obtained by Bainimarama.

Meanwhile, Bainimarama has so far only secured his highest vote from police polling venues at the Sigatoka Police Bure.

He managed to collect 29 votes, while Rabuka collected 24 from the venue.

Results from 11 venues where police officers voted have already been released by the FEO.

Bainimarama has also secured the highest votes from military personnel who voted at the RFMF Strategic Headquarters.

He received 61 votes from this location, while former Commander Viliame Naupoto received 17 police votes and Rabuka received only 11 votes.

So far, this is the only venue where military officers voted, and its results have been released.

The Fijian Elections Office will progressively update the results App.

On Sunday final results will be updated at 6am.