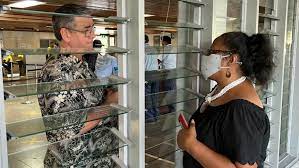 A legal row over moves by the Kiribati government to deport an Australian citizen and senior Kiribati judge who is married to the country’s opposition leader has intensified after a New York-based lawyer acting for the government said the decision of the executive should be treated with “maximum deference”.

Lawyers for Australian David Lambourne, a former solicitor-general of Kiribati who was appointed to its High Court in 2018, successfully applied to the country’s Court of Appeal last Friday for an urgent order releasing him from immigration detention pending a further court hearing.

The parties returned to court on Friday. Sydney barristers Perry Herzfeld, SC, and Daniel Reynolds acted for Lambourne and argued deportation notices issued to him by the government were invalid.

“It seems to be suggested that neither we nor the court is entitled to know why the [Kiribati president] … decreed Justice Lambourne to be a risk to security and the court must give utmost deference to that assessment,” Herzfeld said, in reference to submissions for the government made by U.S lawyer Ravi Batra.

“There’s no doctrine in the English law, which applies in Kiribati, of maximum deference or utmost deference to a decree of [the president].”

Lambourne is a long-time resident of Kiribati and lives with his wife, opposition leader Tessie Lambourne, in the nation’s capital, South Tarawa.

Tessie Lambourne, a former Ambassador to Taiwan, recently accused the government of “bending over backwards to accommodate the interests of China” after it withdrew Kiribati from the Pacific Islands Forum, the key diplomatic body in the Pacific.

“My assessment is that maybe China wants to isolate us from the rest of the Forum,” she told SBS in July.

President Taneti Maamau, acting as immigration minister, issued a deportation order to Lambourne last week on the grounds that he had been “declared a threat or risk to security”. The Court of Appeal said in a judgment last Friday that efforts to deport Lambourne “appear to have been in clear breach” of orders made last week.
The government had sought to stop Lambourne from re-entering the country after a trip to Australia but he returned this month on a visitor visa that did not allow him to work as a judge.

Kiribati’s deputy solicitor-general argued last week that Lambourne had breached a condition of that visa by working in Kiribati because he visited the courthouse at Betio.

Herzfeld said Lambourne should not have been issued with a visa that prevented him from working in the country, but it was unreasonable in any case to conclude he had been working in breach of his visa condition.

In a theatrical performance that included thumping his fist on the table at one stage, the New York-based Batra said: “A judge is as close as we get to a messenger of God on Earth. David Lambourne is nothing of the kind.

“This court ought to give maximum deference, as our Supreme Court does, when our President sends a letter saying, ‘Get out of this, it’s a matter of national security.’ You don’t get to know [the reasons why]. It’s called separation of powers.

“Unfortunately, today’s standards of civility don’t allow the kind of punishment he [Lambourne] deserves, so we’ll leave that to God.”

The attorney-general also suspended Lambourne as a judge in May, citing unspecified misconduct grounds.

In a decision last week, the Court of Appeal said the president had attempted last Thursday to “recall, vacate and nullify” Lambourne’s judicial appointment in 2018 and to reappoint him for a term that expired on 30 June last year. The court said it doubted whether this was a valid use of specific power in the Constitution.

Batra claimed Lambourne “wants to get paid for life when there’s no such position”.

“Because his wife is … leader of the opposition, he thinks he’s better than anybody else and he can carry on a coup, a political coup.”

Batra was told at one stage by Court of Appeal Justice Peter Blanchard, a retired New Zealand judge, that he was repeating “the same argument over and over” and it was becoming “tiresome”.

Herzfeld rejected Batra’s submissions and said it was a “brave allegation” by Batra to suggest Lambourne’s previous legal challenge to the apparent truncation of his term was a fraud on the court.

The Court of Appeal – justices Blanchard, Rodney Hansen and Paul Heath, all of whom are retired New Zealand judges – reserved their decision and will deliver judgment at a later date.

Vanuatu upset by Indonesia’s US$100,000 donation to MSG