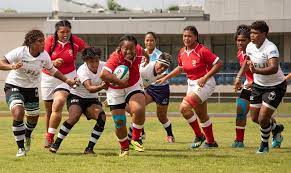 Oceania Rise Rugby has been described as a “game-changer” that can help with “levelling the playing field for women” in the Pacific Islands.

Last month, Oceania Rugby launched the programme in partnership with the Australian Government’s PacificAus Sports in order to positively impact gender equality across the region.

As part of Oceania Rise Rugby, which is a three-year project, unions in Fiji, Samoa, Solomon Islands and Tonga will receive funding to provide women with opportunities both on and off the pitch.

Oceania Rugby hopes the project will lead to a significant increase in opportunities for and capability of women in leadership while filling gaps in playing pathways in each country.

To that end, each participating union has started the process of appointing women to new full-time positions in senior management, while they have identified where domestic pathways and competitions need to be strengthened.

“Oceania Rise Rugby (ORR) is a game-changer for women because it is levelling the playing field for women in rugby, which is perceived as a man’s game,” Tongan strength and conditioning (S&C) coach Viki Fiefia said.

“ORR is challenging gender inequality by recruiting and developing women for key leadership positions that would otherwise be unattainable.”

Siutite Ma’ake, meanwhile, is excited about the prospect of increased domestic 15s competitions in Tonga, which could help on-island players stake their claim for test recognition.

“More competitions mean more opportunities and experience for us local girls,” she said. “Tonga hasn’t had any women’s 15s competition for a few years now.

“There are many opportunities when Tonga participate in Oceania Rugby [tournaments] but local girls cannot get there without competitions and tournaments to compete in here in order to be selected for the national team.

“Game time is the most important thing for a player as we will gain experience, learn, grow to be better because the talent is here, we just don’t have enough resources to run the competitions and tournaments that will improve everyone and get us to a better level.”

Tonga has faced a number of challenges in the wake of the volcanic eruption and tsunami that caused catastrophic damage to the islands at the end of 2021.

For Ma’ake, playing rugby has offered an escape from the stresses of day-to-day life as the country continues its recovery from the disaster.

“[It has helped] our mental health as playing rugby is a good distraction away from the drama that happened during the tsunami,” Ma’ake said.

“Rugby is a team sport, you get to meet up with your team-mates, do some bonding, just get your mind off things, focus on teamwork, skills instead of thinking of all the running away from the waves and all the chaos the tsunami caused.”

Fiefia admits rugby was not a priority for much of the year but says that “things are slowly returning to normal” and believes the Oceania Rise Rugby project gives the Tonga Rugby Football Union an opportunity to build a more inclusive future.

“There is diversity with the integration of women into leadership positions which now allows women to have a voice,” she said.

“We now are in key positions involved in making decisions that will greatly impact the increase of participation of girls and women playing rugby; promoting the growth of women’s rugby here in Tonga.”

Fiefia insists there is “definitely no shortage of strong Tongan women with the ability to lead” and says she wants to help convince more women to take up S&C coaching.

“I hope to inspire aspiring female S&C coaches to seriously consider careers in a field in which local women have had no representation previously.

“I hope to be able to compile a training manual, which details all aspects of S&C to improve the performance of Tongan girls and women rugby players, while emphasising injury prevention.”

Erin Hatton, Oceania Rugby Sport for Development and Partnerships Manager, said: “Oceania Rugby is thrilled with how the announcement of the programme has been received in the four countries but also across the whole region.

“There is a real energy around women in rugby in our region at the moment with some of the outstanding results that we’ve had in both the sevens and 15s within Oceania, the growth of the game in many countries in our region and then hosting Rugby World Cup 2021 in New Zealand at the end of the year.