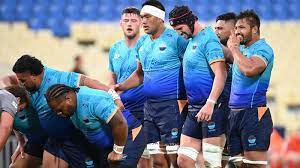 Moana Pasifika will now play the Gallagher Chiefs at Mt Smart Stadium in Auckland at 7.05pm on Saturday night in what will be the only New Zealand-based DHL Super Rugby Pacific match this weekend.

No matches have been cancelled and NZR remains confident the five postponed matches this season can be rescheduled later in the competition. The original Round 5 schedule would have seen the Highlanders host Moana Pasifika in Dunedin, the Blues play the Crusaders in Christchurch, and the Hurricanes play the Gallagher Chiefs in Wellington.

“Like many businesses around New Zealand we continue to deal with the disruptions of COVID on our people, and the health of the Blues, Highlanders and Crusaders players and staff was the key consideration in withdrawing those teams from this weekend’s matches.

“With three teams remaining we had to look at what was the best outcome for the competition and a key consideration was to ensure Moana Pasifika got back on the field again after having three matches postponed through the opening month of the season, which is exciting for the club and their fans. This change also allows Moana Pasifika to catch up on their previously postponed Round 2 match against the Chiefs.

“We are looking at the schedule and believe there are opportunities to play those matches without major disruption to the draw and will announce details in due course.”

“The easing of border restrictions allows New Zealand Rugby to plan with more certainty toward teams traveling into New Zealand later in the season, both for DHL Super Rugby Pacific and for our international schedules.