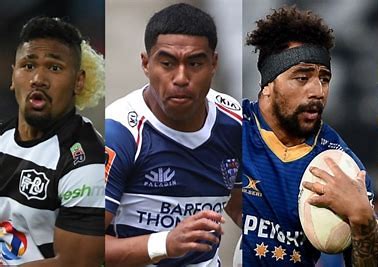 Pasifika communities across the Pacific are celebrating the official confirmation of the first ever Moana Pasifika and the Fijian Drua squads for the 2022 Super Rugby Pacific competition.

The squads were announced exclusively to fans over the past two months and were finalised alongside teams unveiled by New Zealand and Australia.

Moana Pasifika completed it’s playing roster Monday with the announcement of former Highlanders and Crusaders outside back, Tima Fainga’anuku.

The 38-man squad is brimming with international and domestic experience, including former Wallabies veterans Sekope Kepu and Christian Leali’ifano, alongside several sons of Samoa and Tonga’s international sides.

Head coach of Moana Pasifika, Aaron Mauger, said he was humbled by the support the community have shown at every milestone marked by the club.

The 45-Test All Black said selecting the squad wasn’t easy, but he’s impressed by the level of enthusiasm shown by each of the players.

“We have been really impressed with these young men, both in our meetings with them and from watching and reviewing their footage,” he said.

“We are particularly excited by the balance of our squad. We have experience, we have talented young players and we have smart game drivers who understand how to expose the strengths of our power athletes.”

Moana Pasifika are expected to assemble once Covid-restrictions in Auckland allow.

Mauger said right now their focus is on trying to bring them together as a Moana aiga (family) first.

“We’ve had to be innovative and adaptable in our approach so far, but our people and our programme will be ready for full team assembly.”

“To know that we only have a couple of pre-season games before we open the whole competition, is both daunting and exciting, but we are really itching to get into it.”

The Fijian Drua have 34 players confirmed for the 2022 season which includes Olympic gold medallists Kalione Nasoko, Napolioni Bolaca and Meli Derenalagi alongside local talent and experience from New Zealand’s NPC.

The squad have relocated to the Lake Ainsworth Sport and Recreation Centre in New South Wales, where they will live and train for the next eight months.

Moana Pasifika opens Super Rugby Pacific 2022 against the Brumbies on Friday 18 February, while Fiji have their first match against the Blues at Auckland’s Eden Park on Saturday 19 February.

Fiji Warriors to ‘step it up a notch’ says Leawere