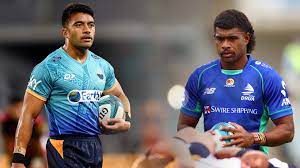 It’s the reason the competition has been renamed ‘Super Rugby Pacific’.

After decades of lobbying, the Pacific finally has two sides in the world’s best provincial rugby competition – the Fijian Drua and Moana Pasifika. And it has taken 13 Rounds in their inaugural season for both sides to go head-to-head.

Both teams have already made massive statements this season and have proven that they belong in the competition.

Moana Pasifika, based in the Pacific melting pot that is Auckland, are packed with experienced Super Rugby campaigners.

They are led by former Wallaby Sekope Kepu with another proud Pacific Islander Christian Leali’ifano controlling their play from the flyhalf position. A solid mix of players proud of their Tongan, Samoan, Fijian and Cook Islands’ heritage make up the rest of the squad. Big boys, big bodies, big hits!

On the other side, the flamboyant Fijians in the Drua are the ‘highlights reel’ of the season. Led by Nemani Nagusa and Meli Derenalagi in the forwards, with Teti Tela and Frank Lomani pulling the strings for flyers like Vinaya Habosi out wide, the Drua are almost unstoppable in full flight. A brand of flair never seen before in Super Rugby!

So it’s the unstoppable force meeting the immovable object at Commbank Stadium on 14 May. Pacific rivalry at its finest. Pride on the line in this epic battle for Pacific supremacy! It’s the one match this season you don’t want to miss.