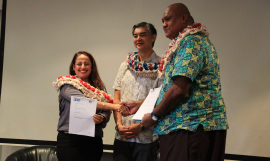 Fiji’s Ministry of Environment (MoE) has signed two Letters of Agreement (LoA) with the Secretariat of the Pacific Regional Environment Programme (SPREP) to implement in Fiji, the By-catch and Integrated Ecosystem Management (BIEM) initiative supported through the Pacific-European Union Marine Partnership (PEUMP) programme as well as to implement the Pacific – European Union Waste Management (PacWastePlus) Programme.

Signing the two agreements on behalf of the Government of Fiji, Permanent Secretary for MoE, Joshua Wycliffe, expressed his ministry’s commitment to the two activities. “We look forward to working with SPREP to approve budget allocations and working with our communities to address their pressing needs in waste management, climate change and marine resource and ocean conservation in Fiji; we particularly wish to acknowledge the European Union and the Government of Sweden in funding and supporting these initiatives.”

“Climate change, biodiversity loss, and waste management and pollution form the triple planetary crises we are currently facing,” he stated.

“As with other Pacific Island members of SPREP, Fiji has committed to several multilateral environmental agreements relevant to biodiversity, ocean conservation, climate change and waste management priorities,” he said. “These letters of agreement provide the basis for a way of working together and to enable SPREP to ensure expertise, capacity building and other necessary resources are made available to implement, monitor and evaluate all aspects of the BIEM Initiative and PacWastePlus programme in Fiji.”

The Director General added that these activities would also contribute to the 2050 Strategy for the Blue Pacific Continent thematic areas of Climate Change and Oceans and Environment, as well to the Sustainable Development Goals and in particular, SDG14.

Speaking at the signature ceremony, the Ambassador of the European Union to Fiji, Sujiro Seam welcomed the partnership between Fiji’s Ministry of Environment and SPREP to implement PEUMP and PacWastePlus in Fiji.

“In line with the priorities of the European Green Deal, the European Union Strategy for Cooperation in the Indo-Pacific and the Blue Green Alliance between the European Union and the Pacific, PEUMP and PacWastePlus programmes support ocean and waste management in the Pacific region. The two LoA signed today enable SPREP and Fiji to translate these regional priorities at the country level, with concrete benefits for local communities through the sustainable use of coastal and marine biodiversity and waste management”, Ambassador Seam said.

The LOA relating to the BIEM Initiative establishes the framework for the Fiji BIEM Initiative Steering Committee led by the MoE, to provide strategic management of the planning, implementation and evaluation of the BIEM Initiative priorities and funding allocations throughout its lifetime. The Initiative will roll out several activities related to the sustainable utilisation of coastal and marine biodiversity.

Through the BIEM Initiative, SPREP is working with the International Union for Conservation of Nature (IUCN), World Wide Fund for Nature (WWF), Birdlife International, the Fiji Maritime College, and government ministries to support marine spatial planning; reduction of by-catch of sharks, turtles and seabirds in the longline fisheries industry; community monitoring and protection of turtles.

Through the PacWastePlus project LOA, MoE will improve organic waste management in communities that do not receive waste collection services. Specifically, the project will assess the existing composting programme in the country and design a suite of suitable community based composting programmes for implementation in targeted communities.

The steering committee meeting for the projects followed the official signature ceremony.