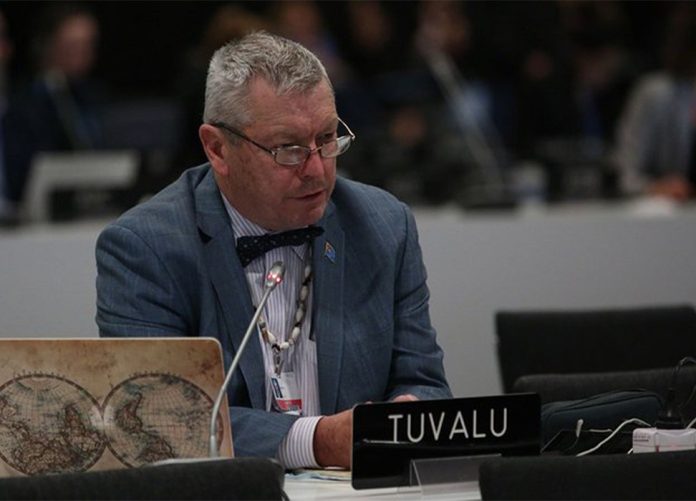 He was in the tiny, low-lying islands of Tuvalu when Cyclone Pam hit the South Pacific in 2015.

“It washed waves right across three islands, destroyed infrastructure, destroyed crops, freshwater, and people had to move off those islands to the capital as a consequence,” he recalled.

Fry, who holds both Australian and Tuvaluan nationality, brings decades of experience defending vulnerable communities from the devasting consequences of extreme weather changes as he takes up his mandate on 01 May, 2022 as the first Special Rapporteur on the promotion and protection of human rights in the context of climate change.

Fry, a long-time climate negotiator for Pacific island states in international climate agreements, is a firm believer in the need for equitable and ambitious action to help vulnerable communities that are being displaced by climate change.

Established by the Human Rights Council in October 2021, the Special Rapporteur will have among his duties to “study and identify how the adverse effects of climate change, including sudden and slow-onset disasters, affect the full and effective enjoyment of human rights and make recommendations on how to address and prevent these adverse effects”.

According to the United Nations High Commissioner for Refugees (UNHCR), more than 20 million people a year are forced to leave their homes and move to other areas in their countries as a result of the increasing intensity and frequency of extreme weather events, such as heavy rainfall, prolonged droughts, desertification, environmental degradation, sea-level rise and cyclones.

Fry has long campaigned for developing countries and small island states, which are particularly vulnerable to the adverse effects of climate change. These nations have often found themselves at odds with rich nations over the issue of compensation.

He worked for the Tuvalu government for over 21 years and served as the country´s Ambassador for Climate Change and Environment between 2015-2019. The Pacific island nation has been prominent in drawing global attention to the struggle against rising sea levels. Its foreign minister gave a video address to a United Nations climate change conference in Glasgow standing knee-deep in seawater.

Drawing on decades of work that has also included places such as Cook Islands, Fiji, Indonesia, Nepal, Samoa, Senegal, Taiwan and Vietnam, Fry stressed there is an “enormous spectrum of issues” that connect human rights and climate change.

Along witHh displacement, drought is worsening living conditions in many communities across the world, including limiting natural resources, such as drinking water. Crops and livestock are being affected, threatening livelihoods, as weather becomes too hot and dry, or too cold and wet. In Pacific island communities, climate change is having a dramatic impact on ocean acidification and access to fish stocks, he warned.

For instance, mining of minerals to produce batteries for electric vehicles, or building hydroelectric dams can have human rights impact. And there’s also the issue of transition: Getting people out of employment in the fossil fuel industry into other industries is a human rights issue, he pointed out.

Fry said the mandate of the Special Rapporteur is interlinked with a number of Sustainable Development Goals, in particular the interface between human rights and climate change, including Goals on clean water and sanitation, inclusive and just energy transition, life below water, and gender equality.

“There’s often a close link between human rights, climate change and gender aspects because often women are at the forefront of some of the impacts of climate change,” he said.

Fry, who teaches part-time at the Fenner School of Environment and Society of the Australian National University, has focused his work on mitigation policies and loss and damage associated with the Paris Agreement, Kyoto Protocol and related instruments.

“There seems to be a lot more focus on efforts to reduce emissions, but there’s not a lot of talk about helping countries adapt to the impacts of climate change and the issue of what we call in climate change loss and damage: to help those people already affected by climate change,” he said.

“That’s where there’s a sort of big gap in the international dialogue around the issue of loss and damage.”