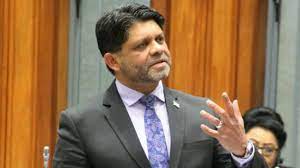 Fijian Minister for Economy Aiyaz Sayed-Khaiyum says it is now up to the University of the South Pacific’s Council (USP) to investigate the alleged unfair appointment within the institution.

Earlier this week, the Minister read out in parliament a letter by a whistleblower who works within the human resources department of USP.

The letter outlines claims of acting appointments made at the institution, also claiming unethical behavior.

Sayed-Khaiyum swore not to reveal the details of the anonymous writer for fear of intimidation.

“We know individual staff, we have the names but obviously not going to reveal it to them, or reveal to the members of public because they fear victimisation because of the culture of bullying which now exists within USP. Marginalisation ostracisation of people who actually want to speak up, speak about due process, they’ve being actually victimized.”

Sayed-Khaiyum said he has a number of viber messages from people who are concerned with events at USP.

The Minister said these sorts of things reinforce the government’s position, and that is that there needs to be an independent inquiry.

He said this goes back to the issue raised by the Chair of the Audit and Risk Committee and the Chancellor.

He admitted that so far, USP has not come back with any update on whether it will act on the allegations of corruption that are causing the Fijian government to withhold its grant to USP.

USP is still yet to respond to questions regarding the allegations made in the letter read in parliament on Wednesday.

Japanese nuclear wastewater to be treated before discharge into Pacific