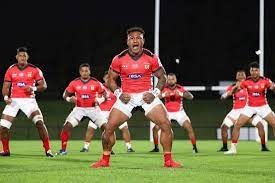 Following their qualification for Rugby World Cup 2023, ‘Ikale Tahi head coach Toutai Kefu says his team will be setting their sights high at next year’s tournament.

Kefu insists his team will not be going to Rugby World Cup 2023 purely to make up the numbers.

The ‘Ikale Tahi’s place in Pool B at next year’s tournament was confirmed last Saturday when they defeated Hong Kong 44-22 in the Asia/Pacific 1 play-off at the Sunshine Stadium in Queensland, Australia.

With Ireland, the number one team in the World Rugby Men’s rankings powered by Capgemini, first up, in Nantes on 16 September, Tonga couldn’t have asked for a tougher start.

Scotland are Tonga’s second opponents, in Nice on 24 September, before they make the trip to Marseille a week later for a game against defending champions South Africa.

Tonga’s final pool game – but not their final game, Kefu hopes – is against Romania in Lille on 8 October.

“Really hard teams, really hard pool, but that’s alright,” was Kefu’s reaction once the dust had settled on their qualification win.

“You need to be with good teams if you want to go to the next stage. If we are really competitive and still in the game halfway through the second half, I think we can surprise a few teams.”

Tonga’s best performances at a Rugby World Cup came in the 2007 and 2011 events when they won a couple of Pool games at each tournament.

In the latter, the ‘Ikale Tahi went into their final pool game against France with qualification for the knockout stages still a possibility, having beaten Japan and picked up a losing bonus point against Canada.

While they defied the odds to beat Les Bleus 19-14, they fell just short of making the last eight, finishing two points off the pace.

With players of the calibre of Charles Piutau and Malakai Fekitoa now available to them, the aim is to go one step further in France.

“We are not happy with just attending the World Cup. We want more. We want to win one or two pool games and go further,” Kefu said.

Tonga know they will need to improve on their performance against Hong Kong when the time arises.

In reality, the game should have been put to bed in the first half but two disallowed tries and inaccuracies in the ‘red zone’ let Hong Kong off the hook and it was only in the third quarter that Tonga pulled away.

“We knew if we played anywhere near our ability we could go to the World Cup.”.