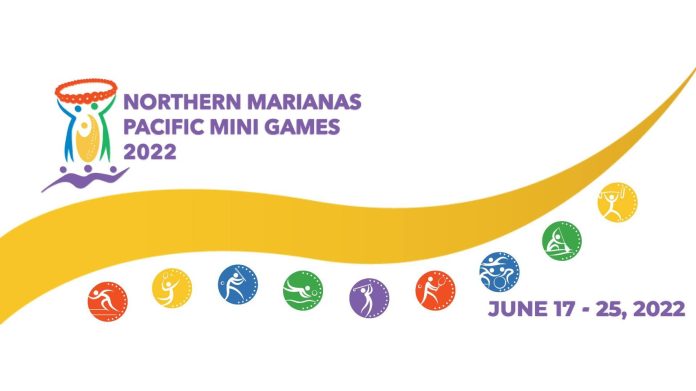 With four days to go before the opening ceremony of the Northern Marianas Pacific Mini Games 2022, the Oleai Sports Complex was a beehive of activity Monday with construction workers putting the finishing touches on the quadrennial event’s central hub.

Mini Games Organizing Committee chair Marco Peter said they’re making the final push to have everything ready for the Mini Games, which the CNMI will host for the first time ever from 17 – 25 June.

“All the venues are ready for play. It’s just the outskirts of the fields that need fixing,” he said.

For the Oleai Sports Complex, the former lawmaker said everything’s complete save for the cosmetic work like the fences and footpaths.

“Only the ‘beautification’ gates are being installed right now and everything from the track and field area to the baseball field will be done today…Play areas are done in all the venues. It’s just the outside that needs to get cleared…We just need to clear out the equipment and sweep the surroundings. We’re all just tidying up right now.”

In fact, Peter boasted that if they remove all the equipment and trucks they can actually start the Games.

As for spectator seating, the MGOC chair said they also have that covered—literally.

“We’re just finalizing the canopies of the two new 400-seat grandstands [beside the track oval]. It will complement the existing 200-seat concrete grandstand that’s already there.”

Ditto for the Francisco M. Palacios Baseball Field, where Peter said they’re about to complete the installation of two 80-seat and one 100-seat bleachers for the venue.

“Pressbox is done too other than a little bit of touch ups on the electrical systems…we’re also clearing up some of the road that is a little bit dusty but the fields of play are ready.”
The baseball field, for all intents and purposes, is operational and Peter said the Palau team has already practiced there.

“I’m so proud of everyone working in this 11th hour. Now, it’s just about keeping everybody calm and keeping the heart rate down,” he said in jest.

The Commonwealth Games are an opportunity to promote inclusion and advance...