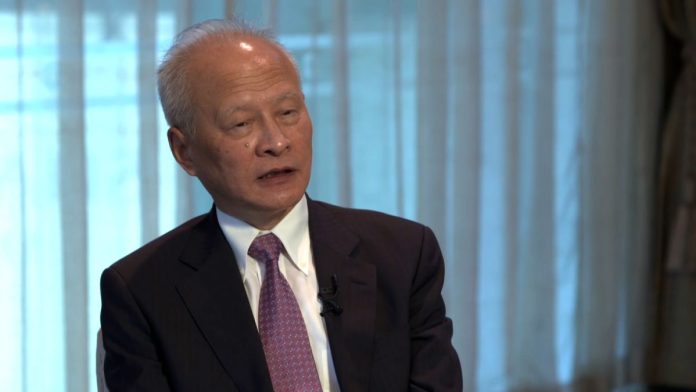 China’s former ambassador to the United States claims Western countries are treating the South Pacific like their “backyard” in a throwback to the colonial era, while Beijing sees the small island nations as equals.

Cui Tiankai made the remarks in an interview with CNN on the sidelines of the Shangri-La Dialogue defense summit in Singapore on Sunday.

In the interview, Cui — who served as Beijing’s envoy in Washington from 2013 to 2021 — attempted to play down growing Western concerns over Beijing’s controversial push for new economic and security agreements with Pacific islands.

He insisted China was taking a so-called modern approach to its relationship with its neighbours, and offering to help in “whatever way” it can, while claiming the mindset of Western countries was stuck in the past.

China’s growing influence in the South Pacific has unsettled Washington, which sees the islands as a strategic link between the U.S territory of Guam and Australia and fears Beijing is becoming more aggressive in pursuing its agenda in the region while seeking to gain a military foothold.

But Cui claimed that China — unlike the U.S and Australia — did not view the region as part of a great power struggle.

“Maybe countries like Australia see these countries as (being their) own backyard, like the United States sees Latin America as its backyard according to the Monroe Doctrine,” Cui said.

“I don’t think that this is (how countries) should work with each other in the 21st century — it is a part of the past.”

The Monroe Doctrine has been the cornerstone of U.S policy in the Americas for almost two centuries. First announced by U.S President James Monroe in 1823, “the doctrine warns European nations that the United States would not tolerate further colonisation or puppet monarchs” in the Western Hemisphere, according to U.S government archives.

It was augmented in 1904 by the Roosevelt Corollary, which President Theodore Roosevelt came up with to warn off European nations who threatened to use armed force to collect debts from nations in the Americas.

But the most famous invocation of the Monroe Doctrine came in 1962, when President John F Kennedy used it as the grounds for getting Soviet missiles out of Cuba during the Cuban Missile Crisis.

While tensions surrounding China’s increasing presence in the South Pacific are far removed from levels reached during the 1962 crisis, Western concerns are growing — and have been supercharged by Beijing’s announcement of a security pact with the Solomon Islands.

The Pacific islands, largely to the northeast of Australia, have long been viewed by military strategists as of vital importance.

Both the U.S and Australia are concerned that Beijing’s playbook for the Pacific could come to resemble its one for the South China Sea, where China has spent years turning remote islands and obscure reefs in disputed areas of the sea into fortified military bases. It has also been accused of using fishing vessels to swarm territory it claims as its own.

China continues to claim the vast majority of the 1.3 million square mile sea, where it has territorial disputes with various other countries, despite a landmark international tribunal that ruled against its claims in 2016.

Meanwhile, the island nations of the South Pacific themselves are typically more concerned about the ravages of climate change than geopolitics — and are wary of being viewed as pawns in a great power struggle.

Cui claimed Beijing does not view the island nations that way.

“We want to do whatever we can to help a number of ongoing social and development projects between China and the Pacific island countries,” said Cui, who was responsible for China’s relations with the Pacific islands before he came to Washington.

“China never sees these countries — or any other country — as part of our so-called ‘pantheon,” Cui said.

“We see them as equal countries, because we (think) countries large or small, rich or poor, strong or weak, should be treated as equals. This is our principle,” he said.

Cui said that principle also applied to the South China Sea. Any disputes there need to be ironed out privately between China and the other countries surrounding the sea — almost all of which Beijing claims as its sovereign territory.

“I very strongly advised my American friends, or maybe some of the Europeans, don’t try to intervene. The more outside countries try to intervene, the more difficult the issue will become,” he said.