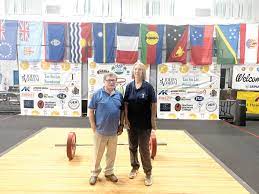 The technical delegate for the Mini Games inspected the MHS Gym after arriving from his home in Australia last Sunday and came away impressed with the facility.

“Believe me this venue is of international standard—the equipment and the facilities. It’s equal to the European Championships held last week in Albania. There’s no difference,” he said.

Coffa, who was a central figure in making Nauru and Samoa weightlifting powerhouses in the past, said what sets the 2022 Mini Games weightlifting venue is its superb warm-up area.

“The warm-up area is all standard. The equipment is the same one we used in the Olympic Games [last year] and the electronic equipment at the back is also the same we used in Tokyo. You can’t go any higher than that.”

Bar none, Coffa said MHS Gym is perfect to host not only the Mini Games but the 2022 Oceania Weightlifting Championships.

“I’ve attended 13 Pacific Games as technical delegate and I’m telling you today this is as good if not better than any other venues that I’ve attended.”

While he conceded that the MHS Gym is not as huge as the one in Samoa, which had room for 3,000 spectators, Coffa reiterated that the “warm-up area is nothing like this.”

He also gave the Mini Games Organizing Committee and CNMI Weightlifting points for procuring a world-class weightlifting platform for the event.

“It’ll be noisy because the partition is not done with timber or anything to take the sound away but it doesn’t matter because the fact is you have a world-class platform. This is the ultimate platform as this is the Rolex of weightlifting platforms.”

Competition-wise, Coffa expects a lot of records will be broken with world-class lifters who have competed in the Olympic Games coming for this year’s Mini Games.

One of the weightlifters he alluded to is his own ward, Australia’s Eileen Cikamatana, who he deemed as one the best young weightlifters not only in Oceania but in the entire world.

“She’s the greatest athlete Oceania has ever had,” he said of Cikamatana, who’s arriving on Wednesday.

Weightlifting will be held for four days starting on June 20. The Solomon Islands will have the most entries with 20 followed by Nauru and Fiji with 18 apiece, Northern Marianas and Tahiti with 14 each, Guam with 12, Samoa with six, Australia and PNG with five each, New Caledonia and Tuvalu with four each, Cook Islands and Vanuatu with two each, and Kiribati with one.