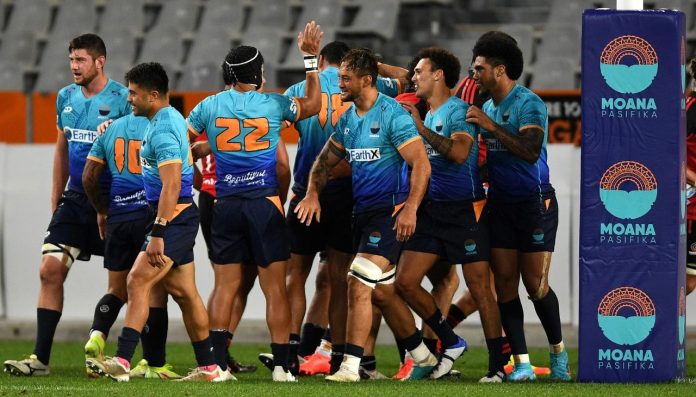 Moana Pasifika and the Western Force have confirmed their teams for Tuesday’s clash at Mt Smart Stadium.

The game was originally slated to be played as part of Super Round, however, a bevy of COVID cases in the Force camp forced the game to be delayed.

With both teams coming off tough defeats over the weekend, they have made several changes for the must-win clash.

Samoan International Jack Lam will lead the hosts as they look to leap off the bottom of the ladder.

He is joined in the backrow by the returning Alamanda Motuga (cheekbone) and Sione Tu’ipulotu, with Veikoso Poloniati and Mahonri Ngakuru forming a fresh second-row pairing.

Hawke’s Bay playmaking duo Ereatara Enari and Lincoln McClutchie will combine in the halves, with Aaron Mauger’s side boosted by the return of Levi Aumua.

Meanwhile, the Western Force have named a strong line-up knowing wins in their final two games and a Highlanders defeat to the Melbourne Rebels will book their spot in the finals.

Ian Prior takes over the captaincy, joined in the halves by Reesjan Pasitoa after his stint in the 12 jersey.

Jeremy Thrush comes into the starting side for Izack Rodda, with Rodda joined on the bench by Feleti Kaitu’u.

In the backs, Bryon Ralston shifts into the centres for the first time at the Super Rugby level, with Jake McIntyre pushed back to fullback.

With several loose forwards out injured, hooker Jack Winchester will serve as backrow cover as part of the reserves, along with the impressive Michael McDonald and Brad Lacey.