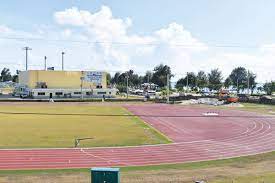 With exactly 23 days to go before the opening of the Northern Marianas Pacific Mini Games 2022, the CNMI is rushing to complete the competition sites for all nine sports that will be held for the quadrennial event.

“Quite exciting as according to our Pacific Games Council CEO Andrew Minogue ‘we’re pretty much ahead compared to other Games deliveries [in the past]. With 27 days away it looks like it’s going to be down to the wire. We will deliver by June 1st everything will be set and done and will start installing our logistics—our container offices, our huge tent for the medic, and also our broadcasting,” said Mini Games Organising Committee CEO Vicente “Ben” Babauta.

Babauta then proceeded to do a rundown of what level of readiness the sports venues are currently in, starting with athletics.

“The track itself is completed. The hammer cage foundation is done and we’re just waiting for the curing and then erect the cage. That should be done in the next couple of days and that completes the track and field.”

He admitted that the MGOC is still chasing some general repairs on the badminton venue at the Gilbert C. Ada Gymnasium.

“Nevertheless we’re doing everything in our power to make sure that we deliver at least the minimum [requirements for badminton]. The air-conditioning is installed and ready to be energized. We just need to get the right voltage and transformers there and the general repair within the gym. We need to remove all the basketball gyms and the posts as well.”

“It’s being manicured as you can see yourself. The perimeter fence is also completed. The press box is finishing as they’ve start running the fiber optic cable thanks to IT&E. The dugout is quite easy and they’re erecting the poles now. The lights are 80% complete there’s just 1 or 2 more poles left. The scoreboard is on the way and it’s arriving on May 27 and will install it right away upon arrival.”

He said the resurfacing of the American Memorial Park tennis courts is ongoing and is expected to be completed by 27 May . For the meantime, national tennis players’ training have been moved to the Pacific Islands Club tennis courts in San Antonio.

“About 85% of the beach volleyball venue is complete. Just a little bit of the area there that [sand] needs to be sifted and reposition the volleyball net poles based on the last dry run.”

Babauta added that Tinian is also excited to host the consolation games for beach volleyball and that they’ve relocated the site to Tachogna Beach instead of Jones Beach because there’s more space for spectators and more sand on the former.

Thankfully, he said, vandals have stopped stealing the anchors needed to float the competition lanes for the Mini Games’ outrigger competition.

“Va’a is ready as we got all the main anchors in. We did a dry run last weekend and it’s pretty cool. We were missing 3 or 4 anchors but we reordered and thanks to Fishguyz Scuba & Charter we’ve replaced them. It’s additional cost to us but it is what it is. Hopefully nobody out there tampers again with our anchors so we could complete our huge event in va’a.”

For golf, Babauta said Coral Ocean Point has been ready obviously for months now and ready to host the region’s best par-busters

Like the people of Tinian, the island of Rota is also ready to welcome triathletes for the Mini Games.

“Rota is pretty much set and they’re quite excited in welcoming athletes for the triathlon event there,” said Babauta.

For weightlifting, the MGOC CEO said the Marianas High School Gymnasium will once again have temperature control after its air-conditioning units were knocked off by successive typhoons.

“As we speak MHS is being airconditioned again. It’s a temporary unit thanks to Chong’s Corp. which managed to install two 30-ton refurbished units.”.