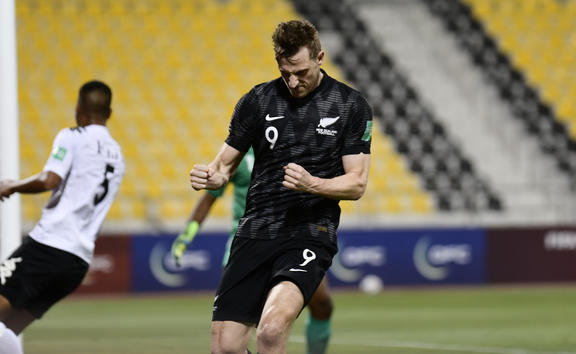 -A record-breaking double by Chris Wood has helped New Zealand to a dominant 4-0 win over Fiji in the FIFA World Cup Qatar 2022 Oceania Qualifiers.

His 73rd minute goal makes him the outright leading goal scorer for the All Whites and vindicated his selection straight into the lineup after arriving in Doha just days before the match.

Coach Danny Hay made seven changes to his New Zealand side that beat Papua New Guinea in their opening match, the most notable being the inclusion of his star striker. Ben Waine was elevated to the starting XI after his goal-scoring performance off the bench in the first game.

It was those two that combined for an early chance, Waine sending a beautiful cross over to find Wood in front of goal, but his header went harmlessly wide. Lekima Gonerau found himself booked for a clumsy challenge on Kosta Barbarouses not long after, then Ashnil Raju was lucky not to face the same action after he brought down New Zealand veteran and captain Winston Reid.

Wood could have scored again after 17 minutes from the six-yard box after a cross from Barbarouses was deflected straight to him, but he blasted his shot over the bar. Only two minutes later Niko Kirwan’s cross was again set up for Wood, this time by Francis de Vries, but the big striker could only hit it straight into Fijian goalkeeper Mohammed Alzaar Alam.

While the New Zealand plan of opening up the Fijians out wide was paying dividends, Marko Stamenic took it upon himself to have a crack from outside the box and was only denied by the post in the 24th minute. A rare Fijian breakaway shortly after resulted in a yellow card to Nando Pijnaker after he pulled down Fiji’s two-goal hero from their opening win, Sairusi Nalabu.

On the stroke of half-time a perfect free kick by Clayton Lewis found Wood at the back post. This time he was not going to be denied, thundering a header past Alzaar Alam to give the New Zealanders a deserved lead at the break.

The second half saw a bit more enterprise from the Fijians, with a nice bit of pressure by veteran skipper Roy Krishna eliciting some fine defending by de Vries. But the period was short-lived, with New Zealand wrestling back control and Wood again missing a header from close range on the hour mark. Wood then turned provider with a beautiful ball for Kirwan to turn back across the goal for Barbarouses, his back heel would have been a stunning way to extend the lead, but it just drifted wide.

Things got a bit testy after that, with referee Salman Falahi reaching for his pocket several times in quick succession, but the last 20 minutes saw New Zealand settle back into the dominant shape they’d established earlier. It paid off handsomely when Elijah Just slotted home a handy chance in front of goal to make it 2-0.

Just then turned provider almost directly off the kick-off, sliding a lovely pass for Wood to take into the box and caress past Alzaar Alam to put the result beyond doubt. In the final play, a foul by Alzaar Alam on a flying Logan Rogerson saw Falahi point to the spot, with Lewis calmly converting to cap off an impressive New Zealand display.