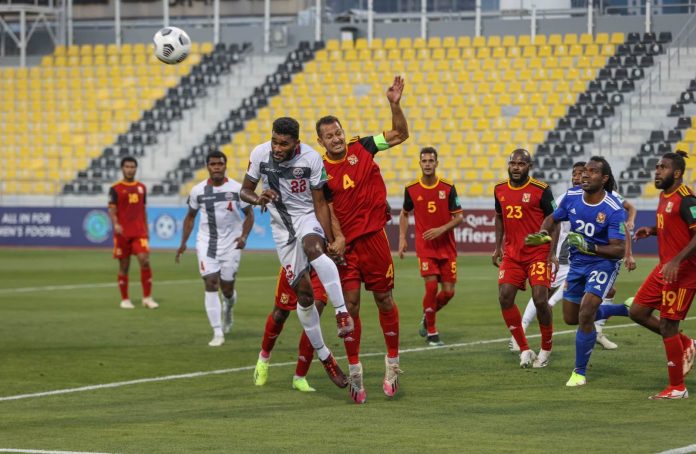 After a couple of days of disruption, the on field action returned to FIFA World Cup Qatar 2022 Oceania Qualifiers in Doha, with Papua New Guinea beating New Caledonia 1-0 in a physical but wildly entertaining encounter at Suhaim Bin Hamad Stadium.

Both sides made several changes to their starting XI’s after first round losses, Papua New Guinea holding top-ranked New Zealand to a solitary goal while New Caledonia went down 2-1 to an impressive Fiji.

The intent on attack was evident right from the kickoff, with a fourth minute volley by New Caledonia’s Jordan Wetria forcing a good diving save by Papua New Guinea keeper Ronald Warisan. But it was the Papua New Guinea side that cashed in on their first real chance, as the ball was lofted down field to Tommy Semmy in the eighth minute. Semmy showed excellent composure to beat defender Jean-Brice Wadriako with a nice touch and then slam home a right footed shot from the edge of the box.

The attacking intent continued in the perfect conditions as New Caledonia looked to equalise, creating several chances with the best being a flick on from a corner that was smartly defended by PNG defender Stahl Gubag. The ball seemed destined for the back of the net but Gubag managed to parry it to the safety of Warisan’s grasp.

Referee Joel Hopken from Vanuatu was kept busy as both teams kept up the breakneck pace throughout the first half, giving a number of free kicks. New Caledonia had a great chance as Morgan Mathelon beat the offside trap, but Georges Gope-Fenepej had the ball taken away from him in a beautifully timed challenge by Felix Komolong, despite the New Caledonian striker’s claims for a penalty.

New Caledonia kept pressing, especially down Wetria’s wing, but couldn’t find a way through the stubborn Papua New Guinea defence as they searched for a goal.

The second half saw the hard-working Warisan back in business early as New Caledonia picked up where they left off, but he and the Papua New Guinea defenders did well to withstand a long period of pressure.

The influential Richard Sele, who was so impressive against Fiji, was introduced for New Caledonia in the 64th minute, a move that almost paid off straight away as they manufactured a terrific break. But it was diffused by Emmanuel Airem’s stunning tackle on Joris Kenon, that most likely saved a goal and summed up the commitment of the Papua New Guinea effort.

Jean-Luc Decoire’s shot not long after slid across the face of Warisan’s goal, which was followed up by a close offside call on Gope-Fenepej when he found himself wide open on goal. But in a flash an even better chance came at the other end, first Papua New Guinea substitute Pale Paul’s shot drew a great save by New Caledonia keeper Mickael Ulile before Semmy’s follow up was parried wide.

New Caledonia forced a few more corner kicks but the fired-up Warisan and his defensive cohort could taste an impending victory. There were shouts for a penalty after the goalkeeper’s diving challenge on Germain Haewegene with five minutes to go, with the frustration shown by Decoire resulting in him being shown a straight red card. Gope-Fenepej was booked for a challenge shortly after as well.

The end-to-end action continued right until the final whistle, but the Papua New Guinea side held on to record a much-needed win. Warisan was outstanding in goal, made even more impressive by the fact that he was troubled by what looked to be a hamstring injury throughout. His contribution to the dramatic match was crucial in securing a memorable victory for Papua New Guinea.

Both sides are back in action on Thursday Doha time, with Papua New Guinea facing Fiji, while New Caledonia play New Zealand.