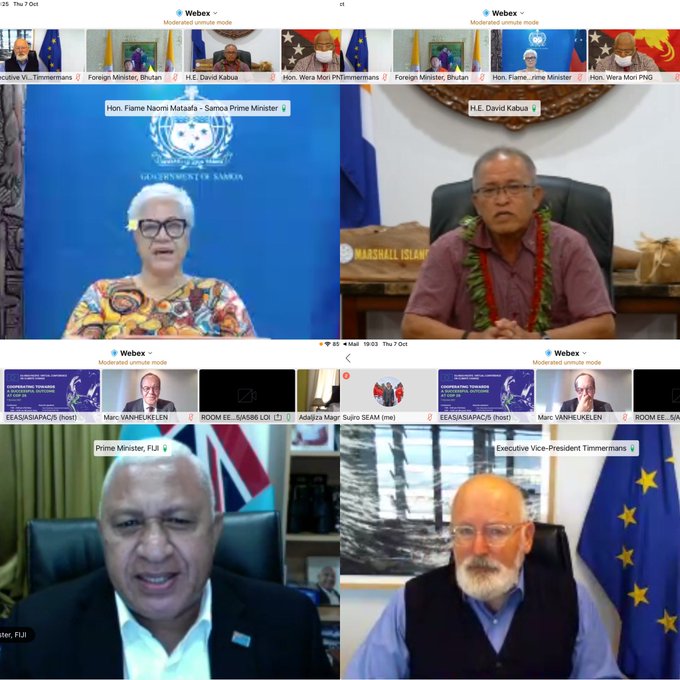 Pacific island leaders have urged industrialised nations to bring plans for real action, not good intentions, to upcoming climate talks, painting a grim picture of the environmental horrors they face.

Fiji Prime Minister Voreqe Bainimarama said low-lying Pacific states were bearing the brunt of global warming’s impact and their voices must be heard at UN-brokered climate negotiations in Glasgow next month.

“For our sake and all of humanity’s, small island developing states will use the full measure of our moral authority against major emitters who refuse to arrive in Glasgow with strong commitments,” he told an EU-backed virtual summit late Thursday.

The summit, known as COP26, will bring together representatives from 196 countries and the European Union for the biggest climate conference since landmark talks in Paris in 2015.

Bainimarama said it must result in solid commitments to swiftly meet the ambitious goal set in Paris of limiting global warming to 1.5 degrees Celsius compared with pre-industrial levels.

The Fijian leader also demanded the phasing out of fossil fuels as quickly as possible, saying Glasgow could not end in “a litany of good intentions”.

“The consequences of inaction are unthinkable,” he said.

“The loss of entire islands, as well as vast stretches of coastline from Lagos to Venice to Miami, the coastal belt of Bangladesh.

“Mass climate-driven migration, wildfire seasons in arid regions that incinerate homes, farms, ecosystems and an unimaginable loss of biodiversity — the of list horrors goes on.”

Marshall Islands President David Kabua said it was difficult for those not on the frontline of the crisis to understand how “urgent, pressing and unavoidable” climate change was in the Pacific.

“My country and this region needs the world to recognise that this cannot wait,” he said.

“We face the most difficult questions — which islands to preserve, what happens when our people are forced to move against their will, how will we preserve our culture?

“We need a signal from the rest of the world, particularly the large emitters, that our voices and our needs are being heard.”

“We are already experiencing intense and frequent tropical cyclones and droughts, increased heavy precipitation and floods, ocean warming and acidification,” she said.

“The impacts are detrimental to our health, wellbeing, livelihoods and way of life,” he said.