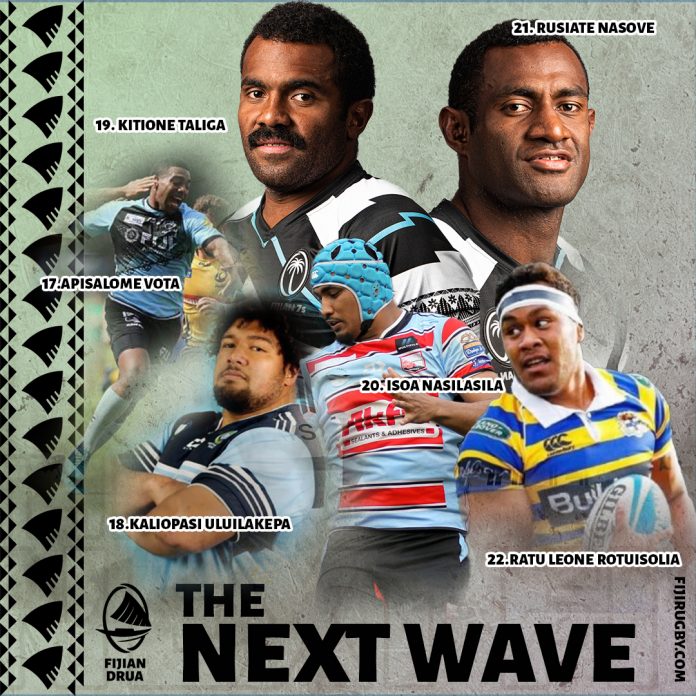 The Fijian Drua, Super Rugby Pacific’s newest club, have unveiled another six additions to their roster for the 2022 competition.

Fijian Drua Interim CEO Brian Thorburn welcomed the six players: “We are really gaining momentum now as we announce Fijian Drua players 17 through 22. Fans will again notice a strong focus on our young stars coming through our highly efficient domestic high performance pathways, something we at the Drua and Fiji Rugby are very proud of. Fans will also note the return of former NRC Drua players. Many of the players know each other and other members of the wider squad, which is always a plus.”

Headlining this fourth wave of player announcements is highly regarded former Fiji U18 and New Zealand U20 prop Uluilakepa, who in 2020 was also part of the Hurricanes (Super Rugby Aotearoa) wider squad.

Thorburn said: “Kaliopasi is an outstanding addition to the Fijian Drua and we are delighted to welcome him back into our vuvale. He is already well known in Fiji as a schools shotput record holder, and has played alongside other Fijian Drua squad members for Marist Brothers High School team. We are very proud to confirm that Kaliopasi has declared his eligibility for Fiji and the Flying Fijians. This is one of the key objectives of the Fijian Drua and a massive boost for our national side. We can’t wait to watch this 22-year old showcase his prowess in Super Rugby.”

Thorburn added: “It is also wonderful to be able to welcome back Suva’s Apisalome Vota, who was part of the NRC Drua which won the competition in 2018. He has been part of the Fijian Warriors and Latui teams, and his hard running skills will give the coaching staff attack options in the midfield.”

“It is equally great to see 2016 Olympics gold medallist Kitione Taliga work his way into the squad, having previously featured for the NRC outfit in 2018. Kitione is a two-time HSBC World Rugby Sevens series winner with the Fijian 7s. He brings in in experience from his time at Stade Français in the top tier of France’s Top 14 competition. Fijian fans are well aware of his creativity on the park as a flyhalf, fullback or backline utility.”

“Lock Isoa Nasilasila is yet another example of the grit of Fijian players. He had 4 caps for the Fiji U20 side in 2019 before unfortunately breaking his leg and thus missing out on the World Junior Championship. Isoa was out of action for 5 months but remained focused on his rehabilitation. He returned stronger to claim a place into the 2020 Fijian Warriors team for the Pacific Rugby Championship (PRC). Isn’t it brilliant that his determination and continued hard work now earns him a place in the Fijian Drua squad?”

“Bolstering our forwards’ stock is Nadroga flanker Rusiate Nasove, who has worked his way through the domestic 7s and provincial 15s pathways. He was a member of the 2019 NRC Drua and the Fijian 7s squad. Rusiate has good aerial skills and that natural ball playing ability that Fijian forwards are renowned for.”

“Rounding out Wave Four is lock Ratu Leone Rotuisolia, who was part of the Fiji U20 team in 2016, and has played junior and university rugby in Australia. He is also well known to many in the Fijian Drua squad, having played alongside other members as well as current Flying Fijians. Ratusolia is yet another shining example of the quality of Fiji’s high performance system.”

The Fijian Drua are expected to announce two more sets of players next week.