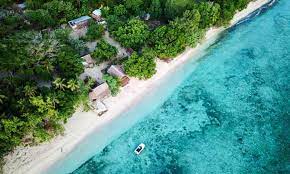 Australia’s new Labor government has been called on to prove its commitment to climate action and support for Pacific countries by backing a campaign led by Vanuatu to see international law changed to recognise climate change harm.

In a letter to the prime minister sent by leading Pacific and Australian NGOs, shared exclusively with Guardian Australia, the groups urged Anthony Albanese to support Vanuatu’s campaign for the international court of justice to issue an advisory opinion on the question of climate change.

“These demands present a great opportunity to your government to demonstrate its willingness to listen to Pacific island voices and to prove that you are prepared to act on the existential threat of the climate crisis in a manner that offers hope to future generations of Australians and Pacific Islanders,” said the letter, which was sent on behalf of groups including 350 Pacific, Amnesty International Australia, Oxfam Pacific and the Pacific Islands Climate Action Network.

“We warmly welcome Foreign Minister [Penny] Wong’s comments announcing a new era in Australian engagement in the Pacific and Australia’s intention to stand shoulder to shoulder with the Pacific family in responding to the climate crisis. We ask that you affirm Australia’s support for the initiative at the Pacific Islands Forum leaders meeting and vote in favour of the resolution at the United Nations general assembly.”

Vanuatu is seeking to get the ICJ, the world’s highest court, to issue an advisory opinion on the climate crisis.

If the campaign is successful then this would be the first authoritative statement on climate change issued by the court and could have huge implications for climate change litigation, the setting of domestic law, and international, regional and domestic disputes on climate harm.

For it to be successful in its campaign, Vanuatu must get a majority of the UN general assembly to vote in favour of presenting a question on the climate crisis to the ICJ in September. Vanuatu is currently undertaking a huge diplomatic campaign to garner support for the advisory opinion.

The calls for Australia to prove its stated commitments on climate change by backing Vanuatu were echoed by Ralph Regenvanu, the country’s opposition leader, who as foreign minister in 2019, was one of the architects of the ICJ campaign.

Regenvanu said that a key test for the Albanese government would come at the Pacific Islands Forum meeting next month, as Pacific countries discuss whether to endorse the question put forward by Vanuatu.

Countries are currently negotiating the language of the question that would be presented to the court, with the formulation of the question crucial to how much leeway the court has to make statements. Legal experts say high-emitting countries might only support a narrowly framed question in order to avoid potential liability.

“I mean, the framing of the question is the really key point that everyone’s interested in,” Regenvanu said. “There is a concern with this obviously testing the new climate credentials of the Australian government … on the question [of] what they will be able to agree to.”

Despite this warning, Regenvanu said he was more optimistic about gaining Australia’s support for the campaign than he would have been had Scott Morrison won the recent election.

“We’re very hopeful that it’ll be a much better outcome than could possibly have happened even a few months ago.”

Regenvanu said that the campaign for the ICJ advisory opinion had been stalled by Covid-19 and had “kind of lost two years” but that might not have been such a bad thing, given Australia’s recent election.

“With regards to the Australian election, it might be the right time,” he said.

Since its election last month, the Albanese government has sought to reset Australia’s relationship with the Pacific, which was damaged by Australia’s inaction on climate.

Pacific countries are at the forefront of the climate crisis, suffering from catastrophic cyclones, king tides, increasing salinity in water tables, droughts and the loss of low-lying islands to sea level rise. The 2021 IPCC report found that global heating above 1.5C would be “catastrophic” for Pacific island nations and could lead to the loss of entire countries due to sea level rise within the century.

Pacific leaders have repeatedly said they consider the climate crisis to be the primary security threat to their region.

In a visit to Fiji last month, Wong said Australia under past governments had “neglected its responsibility to act on climate” but that the Albanese government would “end the climate wars in Australia”.