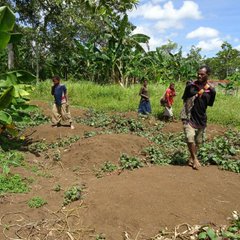 There are warnings that children born today can expect to live through up to 24 times more extreme weather events than their grandparents will have experienced, and there are dramatic predictions for those in the Pacific.

The authors say their findings should serve as a catalyst to speed up international action on climate change.

Researchers at the Vrije Universiteit Brussel in Belgium looked at 178 countries world wide.

Their climate modelling reveals that under Paris Agreement pledges made by countries around the world, a child born in 2020 in Papua New Guinea will face 10 times as many heatwaves and double the risk of fires, compared to someone born in the 1960s.

They also predict that in Vanuatu, a country already considered to be the world’s most ‘at risk’ for natural disasters, will face new challenges including nearly three times as many droughts.

The findings are a worry for teenager Annies from Vanuatu, who has lived through some of the strongest cyclones ever recorded — before she’d even turned 18.

“Though Vanuatu contributes to 0.0001 per cent of the global emissions, we are the most vulnerable country…as a young girl, I realised that my great grandparents have lived in a safe and healthy environment 80 years ago, compared to my living nowadays,” she said.

“I am trying to cope with all these environmental changes. [It] made me question the future of my children and my grandchildren.”

Her family home was hit hard by flooding in 2016.

“I was so scared because it almost flooded my home. I told my mother how serious the situation was, they need to move further inland because close to the river,” she said.

14-year-old Australian Ella is so worried about the futures, she has become a climate activist and is one of the organisers for the kids’ climate change campaign, SchoolStrike4Climate.

“I’m definitely worried about climate change, because in the future, these events are only going to worsen,” she said.

That is what is what the climate modelling in the “Born into the Climate Crisis” report predicts.

“It shows unequivocally that climate change is exposing children to disasters at a scale that their grandparents would never have imagined,” the report’s author, Erin Ryan said.

They looked at the chances of increased heatwaves, crop failure, droughts, river floods and bushfires.

In New Caledonia, children are projected to face nearly 10 times the risk of floods.

In French Polynesia, it’s predicted kids will experience 18 times as many droughts.

However, the report didn’t look at the two biggest risks to Pacific islands, cyclones and rising sea levels, because they didn’t fit the terms of reference.

“As you may be aware, and as the IPCC research bears out, cyclones as a result of climate change, aren’t actually projected to increase in frequency. But they’ll increase in severity and intensity, which is exactly what we’ve seen in recent years, in Vanuatu, in Fiji and in Tonga,” said Ryan.

She said that even without those two key threats included in the modelling, the picture it paints for future generations is bleak.

“All of this data goes to show that we are in crisis. This is a climate crisis. And this is an intergenerational child rights crisis,” she said.

But the climate researchers also found that the situation would change dramatically if warming is limited to 1.5 degrees above pre-industrial levels.

In the lead up to the global climate talks in Glasgow in November, Erin Ryan and her colleagues are calling on governments around the world to step up their action.

Kiribati Government declares state of disaster due to severe drought

World Environment Day: Earth ‘cannot keep up with our demands’