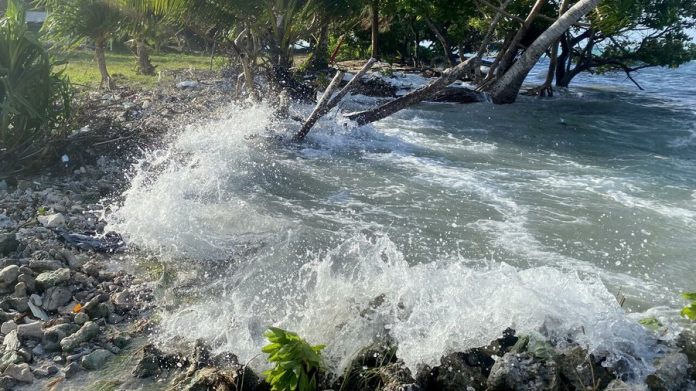 Pacific atoll nations on Wednesday launched a new global partnership to preserve their sovereignty and heritage as their countries disappear under rising seas triggered by climate change.

The Rising Nations Initiative was announced at an event on the sidelines of the UN General Assembly by Tuvalu Prime Minister Kausea Natano and President David Kabua of the Marshall Islands, with countries including Germany, the United States and Canada as early supporters.

“The climate crisis is creating an increasingly uncertain future for people in most parts of the world,” Natano said.

“Paradoxically, in my region, the Pacific, it is making our future increasingly certain — but not in a way that gives any kind of comfort.”

Pacific island nations account for just 0.03 percent of global emissions yet are set to lose considerable territory in this century, with some becoming uninhabitable even if the world meets the Paris accord goal of limiting long-term warming to 1.5 degrees Celsius.

Accordingly, Tuvalu, Kiribati and the Marshall Islands are calling for a global settlement guaranteeing their states a “permanent existence” beyond the habitable lifetime of their atolls.

The initiative puts forward a four-point plan: reaffirming the international community’s commitment to preserving their sovereignty; launching an adaptation program to increase resilience and protect livelihoods; creating a repository for the islands’ cultural heritage; and supporting the nations to acquire UNESCO World Heritage Status.

“We know that even at 1.5C average global temperature rise, our lands will eventually be submerged,” said Kabua.

“Now we seek the same deep partnership from the international community to preserve our right to nationhood long into the future, retaining full rights to our national identity, and sustaining our rich heritage.”

Coral reef bleaching is reducing fish stocks and imperiling tourism, pushing up costs and forcing people to leave their homes.