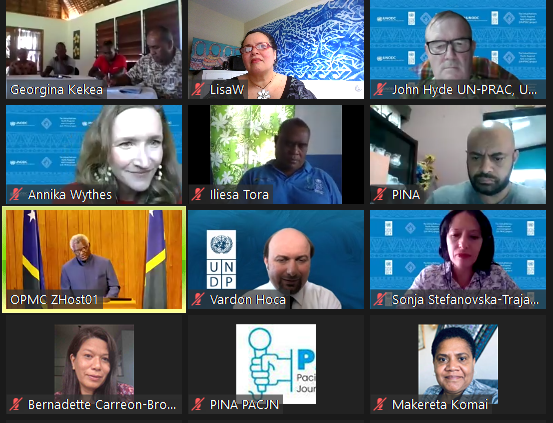 Pacific Island media CEOs and owners are meeting in the Solomon Islands and online from today to consider how they can better support anti-corruption reporting in their local media.

“The facilitation of trans-national crime and systemic weaknesses exacerbated by COVID-19 are impacting on corruption in the Pacific. The media is a key partner in rooting out corruption, as recognised in the UN Special session of the General Assembly against corruption (UNGASS) in June, which called on governments to respect, promote and protect the freedom to seek, receive, publish and disseminate information concerning corruption,” said Jeremy Douglas, UNODC Regional Representative for Southeast Asia and the Pacific.

“Tackling corruption needs a whole-of-society commitment and Pacific media have a key role to identify priorities, highlight gaps and support evidence-based solutions. Local media can contribute to ensuring that the Sustainable Development Goals and Teieniwa Vision governance commitments are on track to the benefit of Pacific citizens and societies at large,” said Levan Bouadze, Resident Representative for UNDP Pacific Office in Fiji.

“Just as criminals engaged in corruption are utilising the latest technologies and laundered money, we have to make sure our Pacific journalists have the resources to be one step ahead, particularly now that the onset of COVID-19 has drastically changed the national and media landscape,” said Pareti.

The two-day summit follows on from the original summit in 2019, which supported the establishment of PACJN with support from PINA and UN-PRAC.

The UN-PRAC Project is a joint initiative by UNODC and UNDP supported by the New Zealand Government.