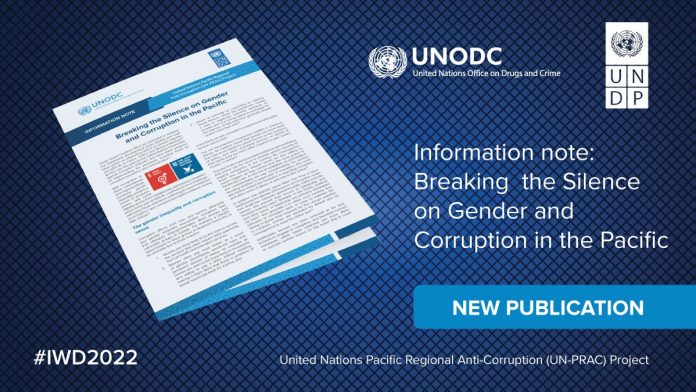 A diverse group of Pacific women engaged in media and civil society joined the United Nations Office on Drugs and Crime (UNODC) on 05 April to explore how gender issues linked to the impact of corruption.

Fiji Sun Investigative Editor, Ivamere Nataro, spoke at the event on the risks of nepotism and sexual exploitation that she explored in a series of articles about male lecturers in authoritative positions abusing their power over young female students.

“People need to be told what corruption is – better education is needed for women and we should use the media much more, especially radio”, said Nataro. “The more we talk about corruption, the more knowledgeable we become.”

Tereeao Teingiia, the President of the Kiribati Association of Non-Government Organisations (KANGO) spoke on the pervasive impact of culture in Kiribati society on women and how this puts women at greater risk of corruption. “Greater education is needed for women to bring about equality, raise awareness on rights, lessen corruption and help development,” said Teingiia.

Palau journalist ernadette Carreon, who undertakes investigations with the Organised Crime and Corruption Reporting Project (OCCRP) and is a leader in the Pacific Anti-Corruption Journalists Network (PACJN), reinforced the latent power that women do have to address corruption.

“Media are the watchdogs for corruption and promoting integrity through balanced, accurate reporting. There is a challenge for women through culture and other obstacles in reporting information, but the new Family Protection Act in Palau provides opportunities for safer reporting of corruption by women and children. This helps women realise how much power they do have.”

Fijian integrity advocate, Grace Konrote, youth coordinator for the Youth for Integrity Network within CLCT Integrity / Transparency Fiji spoke on the prevalence of gender-based violence and sextortion and how advocacy has worked among youth to build awareness. “There is a gap in research on gender and corruption, so this new paper and this type of events help our advocacy efforts,” said Konrote.

“The role of media and CSOs to raise awareness on the gendered aspect of corruption is crucial. Highlighting and understanding the role of CSOs and media in exposing corruption and its gender aspect, promoting oversight and identifying the enablers and obstacles to their work is key to create a ‘healthy’ civic space,” said Cauchois.

UNODC will be hosting a further four webinars in this gender and corruption in the Pacific series: Public service – Public integrity practices – 26 April; Beneficiaries of public services – 17 May; Politics and elections – 31 May; and Private sector Integrity – 13 June.

The new information note: Breaking the Silence on Gender and Corruption in the Pacific can be viewed at:
https://www.unodc.org/roseap/uploads/documents/pacific/2022/Gender_and_Corruption_in_the_Pacific.pdf

Solomon Islands ICAC: how did it happen?