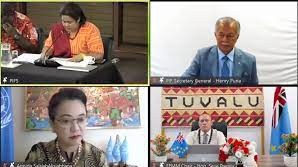 An unprecedented conference organised by the Pacific Islands Forum has opened in Suva, and it’s bringing together island governments and their creditors to tackle the twin problem of rising debt and climate change.

Seven Pacific nations are considered to be at high risk of debt distress, including the most populous, Papua New Guinea.

Among the speakers is Luke Fletcher, the Executive Director of Jubilee Australia, a non-profit organisation that lobbies for economic justice and accountability for communities in the Asia-Pacific.

Dr Fletcher said the key to the success of the week-long event will be firmly establishing the link between debt and the climate crisis.

“Connecting these two issues is really critical because not enough is being done to help Pacific nations adapt, and certainly financially, this is where countries need to step up,” he told Pacific Beat.

Dr Fletcher will address the conference on the final day and he wants to drive home the idea of climate finance being largely grant based in future, and institutionalised at a regional level.

“So it’s not new debt creating, and the pros are determined by the nations where the impacts are happening themselves. It sounds obvious when you say it, but it’s really important in terms of the question of debt.”

And Dr Fletcher would also like to see the introduction of an initiative similar to that established in the late 1990s, which reduced the debt burden on mainly Africa and Latin American nations, with the intention of diverting funds into poverty reduction.

“So what we’d be arguing is that the world needs something like this, but instead of focusing on poverty reduction, the focus would be more on climate change adaptation, and maybe to a certain extent, mitigation.”

What ever agreements may be reached during the four day conference, China’s involvement is seen as critical.

“It’s the largest bilateral creditor in the Pacific….The presence of China is important. We’re hearing that China looks like it will be attending, we’ll find out when the conference goes on through the week,” said Dr Fletcher.