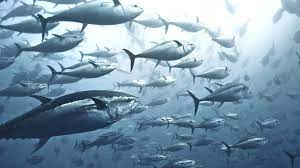 Four commercially-fished tuna species are on the path to recovery thanks to the enforcement of regional fishing quotas over the last decade, according to Saturday’s update of the IUCN Red List of Threatened Species released at the IUCN World Conservation Congress in Marseille.

However, the recovery comes in the midst of growing pressures on marine species, with 37 percent of the world’s sharks and rays now threatened with extinction primarily due to overfishing, compounded by loss and degradation of habitat and climate change.

The IUCN Red List now includes 138,374 species of which 38,543 are threatened with extinction.

“States and others now gathered at the IUCN World Conservation Congress in Marseille must seize the opportunity to boost ambition on biodiversity conservation, and work towards binding targets based on sound scientific data. These Red List assessments demonstrate just how closely our lives and livelihoods are intertwined with biodiversity.”

In Saturday’s Red List update, the seven most commercially fished tuna species were reassessed. Four of them showed signs of recovery thanks to countries enforcing more sustainable fishing quotas and successfully combatting illegal fishing. The Atlantic bluefin tuna (Thunnus thynnus) moved from Endangered to Least Concern while the Southern bluefin tuna (Thunnus maccoyii) moved from Critically Endangered to Endangered. The albacore (Thunnus alalunga) and yellowfin tunas (Thunnus albacares) both moved from near threatened to least concern.

Despite global improvement at the species level, many regional tuna stocks remain severely depleted. For example, while the larger, eastern population of Atlantic bluefin tuna, which originates in the Mediterranean, has increased by at least 22 percent over the last four decades, the species’ smaller native western Atlantic population, which spawns in the Gulf of Mexico, has declined by more than half in the same period. The yellowfin tuna meanwhile continues to be overfished in the Indian Ocean.

“These Red List assessments are proof that sustainable fisheries approaches work, with enormous long-term benefits for livelihoods and biodiversity. We need to continue enforcing sustainable fishing quotas and cracking down on illegal fishing,” said Dr Bruce B. Collette, Chair of the IUCN SSC Tuna and Billfish Specialist Group. “Tuna species migrate across thousands of kilometres, so coordinating their management globally is also key.”

The Pacific bluefin tuna (Thunnus orientalis) moved from Vulnerable to Near Threatened in this update due to the availability of newer stock assessment data and models. This species remains severely depleted at less than five percent of its original biomass. Other tuna species reassessed for this Red List update include the bigeye tuna (Thunnus obesus) which remains Vulnerable, and the skipjack tuna (Katsuwonus pelamis) which remains Least Concern.

TheIUCN Red List update also includes a comprehensive reassessment of the world’s shark and ray species, which reveals 37 percent are now threatened with extinction, demonstrating that effective management measures are lacking throughout much of the world’s oceans. All of the threatened shark and ray species are overfished, with 31 percent further affected by loss and degradation of habitat and 10 percent affected by climate change.

“By supporting the addition of over 1,600 species to the IUCN Red List in this update, Toyota is proud to be contributing towards the latest knowledge about the health of the world’s biodiversity. This information is crucial to inform commitments made at the IUCN World Conservation Congress, which will drive action to reverse biodiversity loss for decades to come,” said a spokesperson of Toyota Motor Corporation.

“The newly released results on the status of commercial tunas emphasise that sustainable fisheries are possible,” said Dr Beth Polidoro, Associate Professor at Arizona State University and Red List Authority Coordinator for the IUCN SSC Tuna and Billfishes Specialist Group. “However, as evidenced by certain stocks that are not doing very well, sustainable management requires improved data collection, reporting efforts, and more smart capture technologies, as well as the design and enforcement of effective regulations, quotas and other policies.”

“Despite the ‘not overfished, no overfishing’ designation for albacore, the associated catch per unit effort (CPUE) has been decreasing for years now, and there’s significant uncertainty about climate change impacts on that species in particular. Hence the importance of continued work on the climate angle, as well as on Harvest Control Rules at the regional level,” said Dr Jack Kittinger, Vice President at Conservation International’s Centre for Oceans.

“We are delighted to see the reassessment of sharks and rays,” said Dr Eimear Nic Lughadha, Senior Research Leader in Conservation Assessment and Analysis at the Royal Botanic Gardens, Kew. “Comprehensive reassessments of ecologically important groups are vital to maintain the value of the Red List as a Barometer of Life. We note striking similarities between the shark and ray statistics and recent estimates for plants: about two in five are threatened with extinction, and habitat loss and degradation present more immediate threats than climate change.”