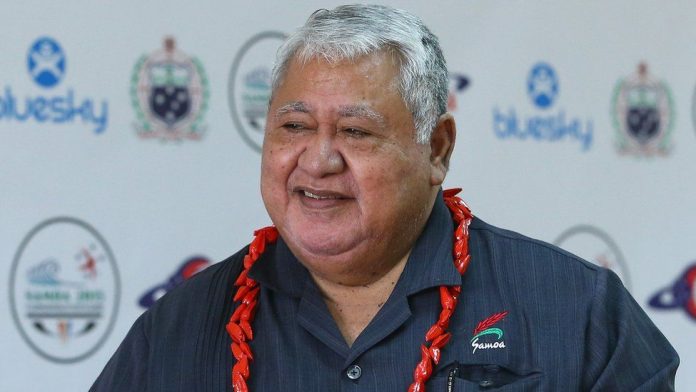 The Human Rights Protection Party leader and former Samoa Prime Minister, Tuilaepa Sailele Malielegaoi has written to the Speaker asking that they wish to be sworn in by the Head of State when parliament convenes on 14 September.

Tuilaepa also suggested that such swearing in should be part of the official opening of the 17th Parliament of Samoa by the Head of State.

What HRPP wants however clashes head on with the Court of Appeal’s decision of 25 August that validated the 24 May swearing-in of the Speaker and the FAST government MPs under a tent outside a locked Parliament. That is also recognised as the first meeting of parliament which was held on the last of the 45 days for parliament to meet after a general election, as warranted by the Constitution.

“The Court has already ruled on the 24 May swearing in and that was the first Parliament meeting. It has been recognised and we are now in office,” said Mata’afa.

Tuilaepa however had been hammering on TV1 over the past month that the FAST government is illegal, unlawful and unconstitutional as it was appointed by the Court.

Tuilaepa also told TV1 that the Court of Appeals decision now “allows people to break the law and be seditious against the government.”

Supported by the HRPP deputy leader Lauofo Fonotoe Lauofo, both said their families, the public and party supporters will come to parliament grounds on the day parliament meets as they need to be sworn in as elected members of their constituencies.

In another TV1 programme, Tuilaepa said that they have followed up with the Speaker and had asked if they can be sworn-in in a separate ceremony by the Head of State ahead of the 14 September parliament session.

Prime Minister Fiamē Naomi Mata’afa told the media, the issue of the swearing in of the HRPP members is the Speaker’s prerogative but her understanding is that only 26 had already been sworn in as Members of Parliament.

As the 45 days mandated by the Constitution for elected members to be sworn-in is well past, there is the possibility of the 18 yet to be sworn HRPP members to return to the voters. At the moment, there are seven by-elections pending for the MPs who lost their seats in the election petitions.

The Annual Budget 2021/2022 will be tabled in the 14 September parliament session.