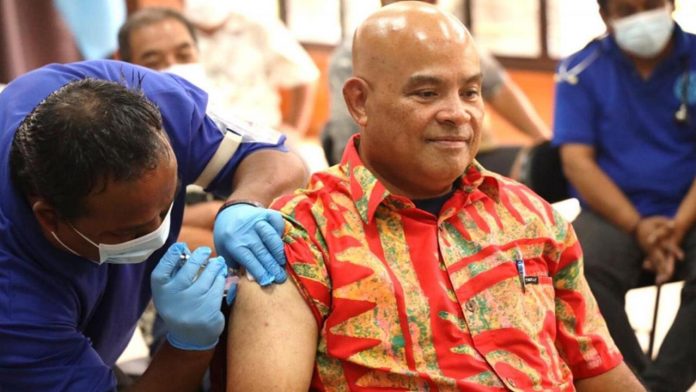 Federated States of Micronesia(FSM) President David Panuelo said Wednesday he’ll continue to walk around his island nation without fear, despite an alleged death threat against him over his government’s vaccine mandate.

A month ago, Micronesia became one of the few countries in the world to impose a broad rule requiring that all eligible citizens get vaccinated against the coronavirus.

Soon after, Panuelo signed a decree requiring anybody receiving federal funds to prove they’ve been vaccinated or risk foregoing their checks. It’s a broad net that captures most of the adult population — everyone from business owners getting pandemic stimulus payments to government workers and pensioners getting social security benefits.

Some islanders have strongly objected to the measure. Last week, a man was charged with making threats and other related offenses, which carry a maximum prison sentence of 10 years if he’s found guilty.
In court documents, prosecutors said the man wrote a Facebook post which read: “President—My decision, My body … You gona need an army to protect you from now on…You will be assassinated for sure…Mark my word President.”

In an interview with The Associated Press, Panuelo said that since the Facebook post was made, authorities had increased the security around his home and office.

“We’re such a friendly country,” Panuelo said. “To see this coming from within our country, from our population, is quite a surprising element that I’ve discovered for the first time.”

He said he’d promised his administration would remain approachable and transparent while in office and he intended to continue with that.

“I tell my people I will still walk out in the open field,” Panuelo said. “Anybody threatens me, I’m not worried about it.”

Micronesia, which is east of the Philippines and is home to about 100,000 people, has gone without any local cases of COVID-19 since the pandemic began, thanks in part to strict border controls.

“You don’t have to wear a mask. Our children are still going to school,” Panuelo said. “There is no virus right now. We’re enjoying the daily freedoms like we’ve been enjoying prior to the COVID breakout. And so we want to keep it this way.”

He said when the nation’s Congress first discussed making vaccines mandatory he raised concerns but later came to embrace the idea.

“We love our citizens, and this is the action that we take to protect our citizens,” Panuelo said. “I’m behaving like a father, like I would to my kids.”

Panuelo said he believed that personal freedoms and liberties are sacrosanct, but also that the nation’s Constitution grants the power to limit certain liberties in situations such as a pandemic.

He said people on the islands tend to live in very close-knit family and community groups, sharing utensils and sleeping on the floor together, and that any outbreak would spread like wildfire.

“I guess freedoms these days are important,” Panuelo said. “But how can freedoms be important if you die from them?”

He said that since the mandate was imposed, vaccination rates had leaped from about 43 percent of eligible Micronesians being fully vaccinated and 52 percent at least partially vaccinated to about 60 percent and 70 percent, respectively.

He said he’d seen some of the backlash to the mandate on social media from people opposed to the vaccines.

James Movick, a restaurant owner, said he was pro-vaccine but had concerns about the mandate. He said it would help islanders maintain their virus-free lifestyles, but many Micronesians worried that any penalties could unfairly target vulnerable groups like pensioners.

Movick said he also wondered if the man who had posted on Facebook actually intended to do anything and if charging him was an overreaction.

Authorities are sensitive to such threats after American lawyer Rachelle Bergeron, 33, was shot and killed outside her home while serving as a prosecutor in Micronesia in 2019.

Two people were later charged in connection with her murder. Panuelo said he’s been involved with that case, which has been delayed because of the pandemic.

As with the Bergeron case, the FBI has been helping investigate the alleged Facebook threat. Micronesia enjoys close relations with the U.S. under a compact of free association.

Panuelo said he doesn’t necessarily think the charges in the Facebook case are an overreaction after the investigation revealed the suspect had a history of making threats and had been involved in other crimes.

He also pointed out that two presidents on the nearby island nation of Palau were assassinated in the 1980s.

A police report said that when interviewed, Edmund said he was friends on Facebook with Jaylo David but didn’t know who was behind the profile.

Public defender Nixon Alten, who is representing Edmund, told AP that Edmund had been released from custody after his arrest and intended to plead not guilty at a hearing later this month. Alten said he couldn’t comment further.

Panuelo said he would continue reinforcing the message to his people that getting vaccinated was the right decision. He hoped about 95 percent of the eligible population would be fully vaccinated by December.

“You only have to look elsewhere to understand why we’re doing this, because people die,” Panuelo said. “And if we don’t do it this way, then we could be next,” he said.

Abortions and same sex marriages not on Samoa Government’s agenda –...