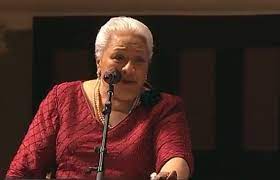 The princess of Tonga shed tears as she formally accepted Jacinda Ardern’s apology on behalf of the Government that oversaw the dawn raids of the 1970s.

The practice saw immigration officials target the homes of Pacific Islands people in the early hours of the morning, beginning in the 1970s, in a crackdown on alleged “overstaying” on their visas.

“This is a typical Polynesian, crying, we are so emotional, I tell you, I’m sorry, it goes with the make-up,” she said.

She then went on to thank Jacinda Ardern.

“I am very grateful for your Government for making the right decision to apologise to right the extreme, inhumane, racist and unjust treatment specifically against my community in the dawn raids era,” Princess Mele Siu’ilikutapu told Ardern at the Auckland Town Hall.

“Let me assure you that we have accepted the fact that some of our people at the time were on the wrong side of the law – yes,” she said, looking at giggles from the crowd.

“This should not have warranted the unleashing of police dogs on our people, the raids of our houses in the early hours of the morning and many other extreme measures put in place at the time.”

Ardern was visibly emotional as she listened to the Tongan royal speak while Social Development Minister Carmel Sepuloni, who is of Tongan descent, wiped tears from her eyes.

The princess thanked Ardern for the gifts announced to the community today as a token of the Government’s formal apology. The gifts include: $2.1 million (US$1.4 million) in academic and vocational scholarships to be made available for Pacific communities; $1 million(US$696,000) in Manaaki New Zealand Short Term Scholarship Training Courses for delegates from Samoa, Tonga, Fiji and Tuvalu; and resources made available to schools and kura who choose to teach the history of the dawn raids.

The Ministry for Culture and Heritage and Ministry for Pacific Peoples will also provide support to enable Pacific artists and/or historians to work with communities to help develop a comprehensive historical record of the dawn raids period.

“I am sure my community is also grateful for the gifts as an exchange of good gestures; as a beginning of a caring, closer and better relationships between your Government and future leaders and our Pacific peoples,” she said.