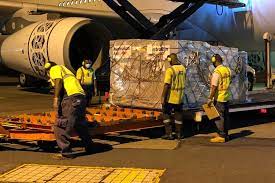 Australia’s donations of COVID-19 vaccines to the Pacific last week topped the 1 million-mark, aided in part by some Australians’ reluctance to be vaccinated with AstraZeneca.

The 1 million doses are on top of Australia’s $130 million (US$95 million) contribution to the World Health Organisation-backed COVAX scheme, which is prioritising the distribution of vaccines to poorer nations that would otherwise miss out.

COVAX is expected to provide only about one-fifth of the Pacific’s required doses and Australia wants to make up the rest through direct, bilateral donations.

The British scientists behind the AstraZeneca vaccine designed it to be stored at fridge temperatures and sold at cost so it could be more easily distributed across the developing world.

Australia is one of the few countries manufacturing AstraZeneca onshore and has said it wants to deliver a minimum 20 million doses to the region.

Minister for the Pacific Zed Seselja said Australia was giving away more vaccines about a month earlier than anticipated as a result of Australians shunning the AstraZeneca vaccine, which has been subject to changing advice since being linked to a rare blood-clotting syndrome in some younger people.

“There’s no doubt that as we’ve seen Pfizer become a more significant part of our overall mix … it has meant that there is more AstraZeneca freed up,” he said in an interview with The Sydney Morning Herald and The Age.

He said the AstraZeneca vaccine had been “very well received” by Pacific nations, which saw it as critical to saving lives and reopening their borders.

However, he said comments by Queensland Premier Annastacia Palaszczuk and her Chief Health Officer, Dr Jeannette Young, about the risks for under-40s had contributed to vaccine hesitancy in PNG.

“They do consume a lot of Queensland media so that was certainly noticed and that discussion was a little bit unhelpful but I wouldn’t say that was the main driver of hesitancy in PNG, there are bigger factors at play,” he said.

Senator Seselja said PNG’s vaccine rollout was constrained not by supply but logistics and hesitancy.

Australia was working with non-governmental organisations, churches, sporting clubs and the NRL to encourage take-up as part of its “end-to-end” support for vaccine donations.

Fiji’s Prime Minister, Frank Bainimarama, has spoken of his “great appreciation” for the vaccines as well as three ambulances, 250 stretcher beds, 20 oxygen concentrators, personal protective equipment and a 19-person medical team of doctors, nurses and logistics experts donated by Australia and New Zealand.

“It’s definitely gone a long way, in Fiji in particular but other countries [as well], to show that when the chips are down, when things are tough, we’re here to help,” he said.

But he said officials who undermined the take-up of the AstraZeneca vaccine by Australians needed to remember the danger of their words for the small island nations, which had no other vaccine choices.

“AstraZeneca is rolling out all around the world but the country closest to home has contributed to feeding misinformation about it, which is one of the biggest hurdles that we’re going to have to overcome to get this part of the world vaccinated,” he said.

“This has meant an unwavering global commitment to provide broad and equitable access to our vaccine around the world at no profit during the pandemic,” Chatwin said. “At the heart of this commitment is our belief that the devastation of this pandemic will not end until every nation is vaccinated,” said Chatwin.