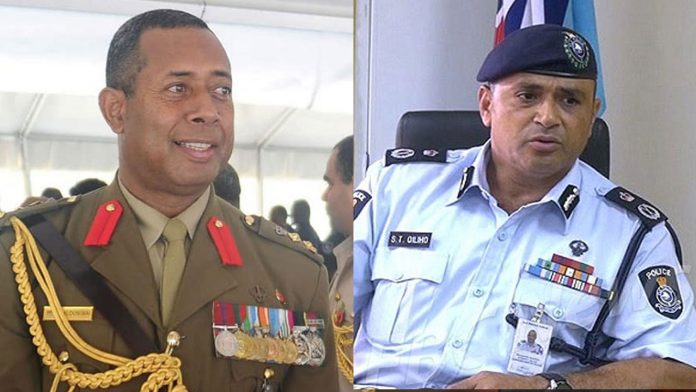 The new Army Commander said non-traditional threat are a new area he will need some focus on.

Kalouniwai who is also part of the National Security Secretariat with the Ministry of Defence said this has helped him understand non-traditional threats like COVID-19.

“COVID-19 is a classic example and it’s something that’s indicating to us that the future may have more security issues that are non-traditional in their context.”

Kalouniwai said they will try and understand best how to work to counter such threats.

Commissioner of Police, Brigadier-General Sitiveni Qiliho said he looks forward to working alongside Kalouniwai in the interest of safeguarding the nation.

“I look forward to working with Brigadier Kalouniwai, especially in internal security matters where we have to play in that and even also with the naval component of the RFMF that he will command that we also work together on.”

Kalouniwai and Qiliho once served together in the RFMF and their close relationship is expected to play a key role in safeguarding the interest of the nation.

Meanwhile, the Fiji Police Force has terminated the contracts of 13 staff as they refused to get vaccinated.

Qiliho said police officers were encouraged to get vaccinated as the nature of their work is considered to be high risk as they interact with the public regularly.

The Police Commissioner saID 13 staff refused to get jabbed and were issued termination letters as they needed to abide by the Government Policy.

The “No Jab, No Job” Policy is a Government initiative to ensure all eligible Fijians are vaccinated against the deadly COVID-19 disease.

In July, Prime Minister Voreqe Bainimarama had made it clear that civil servants are to be vaccinated as a condition of their employment.