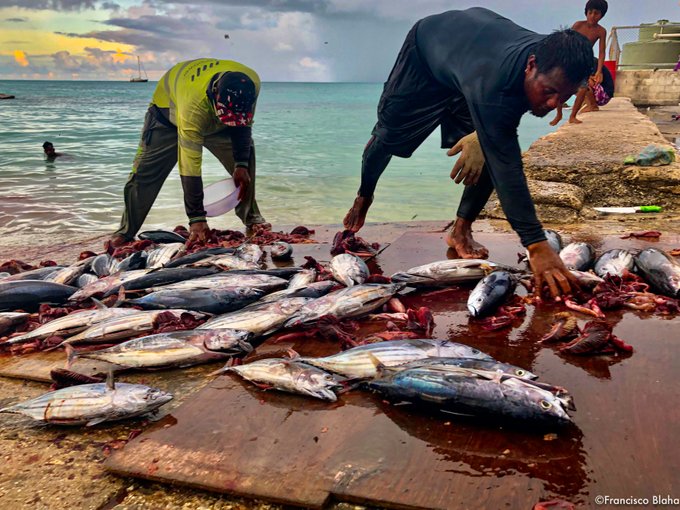 Since long before the steel-hulled fishing boats from foreign countries arrived in the South Pacific its people have had their own systems for sharing the ocean’s catches.

In the New Zealand colony of Tokelau, in the middle of the region, the 1,400 people living on its three atolls practise a system called inati, which ensures every household gets fish.

Several times a month all atoll men are given time to prepare and bait lines and the “grey hairs” – as leaders are called – decide on the targeted fish, including tuna and trevally, using traditional knowledge of the best grounds, along with tides and the phases of the moon. They set off late at night and return 12 hours later, well after the sun has risen. Their catch is then sorted into different species and sizes. Bigger families get bigger shares.

Across the Pacific, traditional fishing practices like this take place alongside huge commercial fishing operations, where the catches are not always shared so fairly, nor disclosed so transparently.

In some ways the fishing industry is a success story for the Pacific region. In a landmark moment of regional cooperation in 1982, eight countries signed the Parties to the Nauru Agreement, which allowed the tiny countries to collectively negotiate the access to their waters by foreign fishing vessels, a move that has generated an additional US$500m a year in revenue.

But the Pacific – the world’s most fertile fishing ground, which supplies well over half of the world’s tuna – also falls victim to illegal fishing, with up to one in every five wild-caught fish illegally caught.

The small Pacific countries in whose waters these illegal fishing operations take place lose out on the profit, suffer depletion of stocks and, without the capacity to fully police their waters, are often also penalised by fishing importers for not being able to guarantee the sustainable provenance of the catch.
How the fishing works

The 17 nations and territories of the region directly control their own territorial waters. Fishing outside the territorial waters, in the nations’ larger exclusive economic zones (EEZ), is monitored and coordinated by the intergovernmental Forum Fisheries Agency. Pacific EEZs produce around US$26bn worth of tuna for consumers but the islands earn only about 10% of that value. Only a handful of Pacific countries process any of the catches in their waters – this usually takes place in Bangkok and other Asian cities. Pacific countries seldom even crew fishing boats and make money only on the licensing.

The high seas beyond the EEZs, claimed by no one, come under the multinational Western and Central Pacific Fisheries Commission (WCPFC).

In 2019, WCPFC’s total tuna catch was a record-setting 2,961,059 tonnes, 81% of the total Pacific Ocean tuna catch and 55% of the global tuna catch. It is dominated by boats from deep-water fishing nations including China, Japan, South Korea and the US.

Industrial-scale fishing began in the South Pacific after the second world war. It was dominated by the US and Japan but in the past two decades China has dispatched wave after wave of fishing boats, mainly longliners and purse seiners.

Longliners set out fishing lines up to 100km in length, each with up to 3,000 hooks. They use electronics to find a school of fish and then, using boat speed, haul the line through it.

Careful skippers avoid killing sharks, billfish such as marlin and swordfish, sea turtles and seabirds in the process. Others do not care. Few longlining tuna boats in the Pacific have independent observers on board; as they are small and often dangerous, few want to sail on them.

Purse seiners are bigger and more comfortable – attracting observers – and use onboard helicopters and floating aggregation devices to attract tuna. A seiner will use boats to encircle an entire school with nets (the “purse”) which is then closed, capturing all the fish – and often dolphins and sharks.
China moves in

Having grossly overfished its own regional waters, notably the China seas, China’s fleets are now taking huge quantities of tuna from the world’s most fertile fishing ground. Since 2012 the Chinese Pacific fishing fleet has grown by more than 500%.

A survey of boats operating in the Pacific in 2016 found that Chinese-flagged vessels far outstripped those of any other country. China had 290 industrial vessels licensed to operate in the region at the time, more than a quarter of the total, and more than the 240 from all the Pacific nations combined.

Their longline fleets, targeting albacore and yellow fin, dominate EEZs in places such as Vanuatu and the high seas. Silky and whitetip sharks are a favourite “bycatch”, their fins kept and the rest dumped.

In the past 10 years China and Hong Kong have sought to close down the shark fin trade, partly by banning the consumption of shark fin soup at government functions, and through public efforts to publicly stigmatise it. The continuing decline in oceanic shark numbers points to limited success so far.

According to WCPFC records, China has more than 600 vessels out of a total of 1,300 foreign-operated ships licensed to fish in the area.

Earlier this year China said it had banned its fleets from catching squid in the Atlantic and Pacific oceans for three months to help populations recover. Global Times, a state-run newspaper, reported that the move highlighted “China’s image as a responsible fishing power and is a milestone for China’s participation in international maritime management”.

“Having depleted fish stocks in domestic waters and encouraged by subsidies, China’s distant-water fishing fleets have been travelling farther and farther afield, and its companies have been building more and more vessels to meet the rising demand for seafood,” she said.

Various estimates of the Chinese fleet range between 1,600 and 3,400 vessels but the ODI study says this figure is likely to be five to eight times higher.

The authors identified 12,490 vessels observed outside internationally recognised Chinese waters between 2017 and 2018.

“China is a fisheries superpower,” the study says. “It has the largest fishing fleet and the largest DWF [distant water fishing] fleet in the world.”

Written by the Brookings fellow Michael Sinclair, a former US Coast Guard captain, it said China used the world’s largest fishing fleet to “devastating effect” to meet its population’s huge demand for protein.

“When working together in fleets, these vessels are rapacious,” Sinclair wrote.

Early last year, China took action when Ecuador alleged that at least 150 Chinese fish vessels had turned off tracking systems so they could operate near the Galapagos Islands. In response in April last year, China’s Bureau of Fisheries announced it would begin blacklisting vessels and captains found to have engaged in IUU fishing. Beijing has banned a number of vessels with its flag for IUU violations in the Pacific, but industry observers question the effectiveness of this, especially because Chinese vessels continue to go blind, switch off their tracking, while in the Pacific.

In the Pacific, much of the suspected IUU is in the unreported column, a result made up of a combination of illegal transshipping on the high seas – when catches are transferred between vessels – and corrupt or careless monitoring in Pacific ports.

While China is the most cited IUU fisher, other nations, notably South Korea and Vanuatu, are also mentioned and IUU fishing remains a continuing problem even with small Pacific states as offenders.

Various studies have tried to give a value to IUU catches. A 2019 report by the World Resources Institute estimated that up to 7.2m tonnes of IUU fish valued at between US$4.3bn to US$8.3bn disappeared annually.

The loss of so much fish to IUU fishing has long been a drain on the economies of small states without any other exports, as well as damaging to the global environment. The inability of Pacific nations to cope with IUU fishing has drawn the ire of rich importers, seeking certification of the legality of fish catches.

The EU gave Vanuatu a warning in 2012 over the role of IUU vessels carrying its flag. Facing the prospect of EU bans on its exports, Vanuatu reformed its regulations and was formally advised in 2016 that the warning had been lifted.

But the country then found itself in trouble with the US over a fleet of apparently Taiwanese-owned vessels flying Vanuatu’s flag, including a ship called Tunago 61.

In 2016, six of Tunago 61’s Indonesian crew murdered the ship’s captain while fishing east of Pitcairn Island. They kept the body in the freezer and took it to Suva, Fiji, where they confessed to the crime. They said they had been working for 16 months without pay and without leaving the ship.

Because the ship was flying under Vanuatu’s flag, Fiji flew the men to Vanuatu, a country they had never been to, where they were convicted and jailed for 18 years. They still sit in cells there.

Transform Aqorau, Solomon Islands’ ambassador to the US, who was responsible for driving through the Parties to the Nauru agreement, has argued that IUU fishing poses one of the biggest threats to fisheries management for developing countries. Flags of convenience and shell company operations in tax havens hide what is happening.

“Most developing countries do not have the capacity to verify information provided by these vessels,” Aqorau said.

As a consequence there was an often substantial loss of income for poorer Pacific countries from IUU fishing, especially because it often involved traditional fishing grounds. “The loss to developing countries is, therefore, not only expressed in economic terms by the lower licence fees paid, but also in resource terms, by the greater accessibility to the resource.”.

The illegal, the unreported and the unregulated, and their presence in...