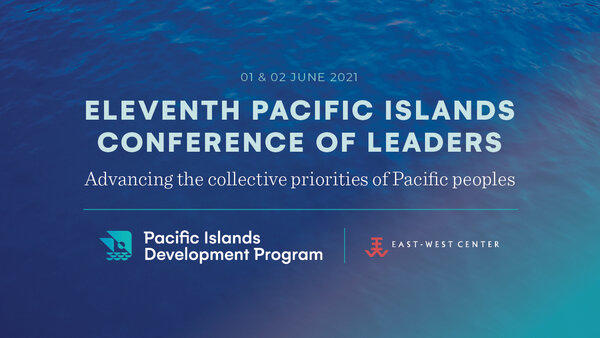 The leaders of 11 nations and territories across the Pacific have issued a group communiqué following a two-day online gathering of the Pacific Islands Conference of Leaders, or PICL. During the June 1-2 summit, a new group of Pacific Island leaders recommitted to the important regional role of the PICL and its Secretariat, the Pacific Islands Development Programme (PIDP) based at the East-West Centre(EWC) in Honolulu.

In discussions during the meeting, the leaders agreed on their top regional priorities. “There was consensus among all delegates that climate, the ongoing Coronavirus pandemic and its long-term impacts, and sustainable economic development and industry innovation were priorities shared universally across the region that are in need of attention and action,” the communiqué reads.

Other shared priorities included expansion of access to information and communication technologies, the importance of regional harmony and diplomacy, and protection of ocean and natural resources. “National and regional security, health and food security, nuclear legacies, post-pandemic economic and other recovery, and disaster preparedness and management were also raised as priorities among many members,” the communiqué reports.

In a video message to the group at the opening of the summit, U.S Secretary of State Antony Blinken said America is committed to assisting Pacific communities’ recovery from the COVID-19 pandemic through vaccine donations and helping devastated island economies rebuild “in a way that’s sustainable and inclusive”.

Calling the climate crisis an existential threat to the Pacific Islands, Blinken cautioned: “We’re out of time for excuses. Countries must make—and meet—ambitious commitments, and governments need to invest in climate adaptation measures that all our communities will need.”

Fielding questions from Pacific leaders in a later session, US Special Presidential Envoy for Climate John Kerry told the group that the U.S remains committed to investing funding and support in adaptation, mitigation, resilience, and sustainability efforts in the Pacific and globally. To deal with climate change, he said, “We have to have an all-of-society effort. I’m convinced that we can not only beat the climate crisis, but we can transition to a sustainable economy for all states including Pacific Islands.”

“Secretary Kerry spoke to integrated critical infrastructure, acknowledging the challenges in reducing emissions in airline and shipping industries upon which Pacific economies are heavily reliant,” the leaders’ communiqué conveys. “He emphasized the need for the U.S to look to its Pacific Islands companions as critical partners whose participation and contributions to addressing the climate crisis are essential.”

A new PICL chair, and reaffirmation of regional role

During the meeting, the delegates voted unanimously to selected Federated States of Micronesia President David W Panuelo to serve as the body’s new chairperson. President Panuelo expressed gratitude to the other leaders on behalf of his nation. “We take your vote of confidence seriously and look to you for your continued guidance and support,” he said. In addition, the leaders voted to hold an in-person meeting in 2022, and again in 2025. Historically, the summit has convened approximately every three years.

With a new slate of regional leaders in office since the PICL last convened in 2016, the meeting offered an opportunity reaffirm the special role that the body, and PIDP as its Secretariat, play in regional affairs. The summit was founded in 1980 by Hawaiʻi Governor George Ariyoshi and Fijian statesman Ratu Sir Kamisese Mara as a forum for Pacific Islands leaders—regardless of political status and without formal intergovernmental protocol—to address shared issues, learn from each other’s experiences, and develop common approaches to policy.

At the same time, PIDP was created at the East-West Center by the leaders’ request to help advance their collective efforts toward achieving and sustaining equitable social and economic development in the region. Besides serving as the PICL’s Secretariat, PIDP is a member of the Council of Regional Organisations of the Pacific (CROP).

“There was a collective expression of the critical importance of the Pacific Islands Development Program in facilitating ongoing dialogue and action specific to the priorities discussed,” the leaders’ communiqué reads. “Several members acknowledged that PIDP is an organisation with vital abilities and obligations to better bridge the Pacific Islands with the United States and other international partners.”

The delegates voted to endorse Dr Mary Therese Perez Hattori as interim director of PIDP until the PICL’s scheduled 2025 meeting. At that point a permanent director will be selected by competitive process in accordance with PIDP’s founding documents.

In closing remarks for the meeting, Panuelo said the PICLʻs “frank, free-flowing exchange of ideas renews my confidence in the Pacific Way of seeking consensus and solidifying the sense of many coming together into one.” Noting the breadth of the PICLʻs membership, he said, “let inclusivity continue to be a lodestar by which the Pacific Islands Conference of Leaders navigates.”

Praising the leaders’ focus on climate change as the top security threat in the region, President Panuelo added, “At the end of the day, none of us could possibly go to bed and rest peacefully without giving our children and grandchildren the assurance that, as Pacific leaders, we are doing our very best to combat the existential threat of Climate Change.”.

Why the world’s most fertile fishing ground is facing a ‘unique...