Can you remember the last time Samoa had a formidable political opposition? It has been a while, and it has been even longer since a different political party was in government. Nanai Anae Dr Iati Iati offered his insights to the Pacific Cooperation Foundation into the mood of the nation, the most pressing issues facing the nation, who might win, and whether the nation is ready for change.

The Human Rights Protection Party (HRPP) has been in power since 1982, apart from a brief respite in the late 1980s, when a coalition government (led by a breakaway group of HRPP members) held office.

An apparently formidable political opposition has now fomented in the form of Faatuatua i Le Atua Samoa ua Tasi (FAST), prompting talk about a possible change of government. This is uncertain; there is no indication of a seismic shift in the voting preferences of traditional institutions at the grassroots level, which has been the HRPP’s powerbase. Nevertheless, the rapid rise of FAST suggests that some form of change is on the horizon. 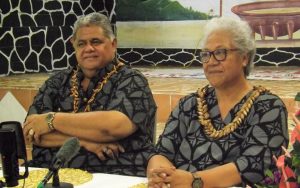 In a very short time, FAST has shown that it is a force to be taken seriously, although how sustainable its popularity will be in the long term is unknown.

In Fiame Naomi Mataafa and Laauli Leuatea Polataivao Schmidt, FAST have a pair of seasoned former HRPP members with an understanding of what is effective in election campaigns, and where the HRPP might be vulnerable. Importantly, both have deep political roots in traditional and modern Samoan politics, which could draw away some of the HRPP’s traditional support.
It will be difficult to topple the HRPP. After nearly 40 years in power, Samoans are unaccustomed to any other leadership group, and familiarity and loyalty are key factors in Samoan elections.

With Tuilaepa Sailele Malielegaoi at the helm, Samoa has experienced both political highs and lows. But, Fiame and Laauli were both integral to the HRPP government at one time and could rightly claim a part in its successes and failures. During its tenure, the HRPP has used a variety of means to create a strong bond with key actors in the traditional political domain. This bond appears intact, although three controversial Bills (The Constitution Amendment Bill 2020, the Judicature Bill 2020 and the Land and Titles Bill 2020), passed late last year, have strained the relationship in some quarters.

The role of the Samoan diaspora under the spotlight. Those eligible to vote must do it locally, so COVID restrictions have limited their direct influence. Nevertheless, the diaspora, including both Samoan citizens and non-citizens remains closely involved and influential in the election buildup. Many in the diaspora have been highly critical of government policies and politics, particularly those relating to customary land rights, aiga, and matai. Social media is replete with sentiments supporting and rejecting the diasporas involvement. The arguments from both sides are well known.

One point that is sometimes missed is that the aiga is a transnational social, economic, and political unit, and overseas members are important to resolving issues back home, particularly involving customary and traditional institutions and rights. Aiga and matai form the foundation of Samoan politics and therefore the government should not tamper with their relations, either internally or abroad. The diaspora cannot be ignored.

For democracy to work effectively there must be political transparency, accountability, legitimacy, and respect for the rule of law. This requires an informed and engaged public, leadership that considers different viewpoints in society, and a strong political opposition.

There are encouraging signs that the Samoan people, both at home and abroad, are engaging in critical discussion about policies and demanding greater transparency and accountability. More of this is needed if Samoa is to have a healthy and vibrant democracy.
At the same time the profanity laced vitriol infusing some of these discussions departs from the customary political etiquette and norms expressed in the concept of va fealoai (rules of behaviour, etiquette).
This is not a conducive environment for polite and peaceful yet robust political dialogue and debate for which traditional Samoan democracy is known for. Someone once said, we should agree to disagree, but not be disagreeable.

Early voting has started however the official election date is Friday 9 April. Information about the Samoa 2021 Election and the results can be found on the Office of the Electoral Commission in Samoa’s website or its official Facebook page. It is expected, the final results will be known during the evening, local time, on Friday 9 April.

Nanai Anae Dr. Iati Iati is a Senior Lecturer in the Politics and International Relations Programme, and Pacific Security Fellow in the Centre for Strategic Studies, Victoria University of Wellington. He teaches International Relations and New Zealand Foreign Policy at the undergraduate level, and Strategic Studies at the Masters level. He recently co-edited a book on New Zealand foreign policy: New Zealand and the World, and has published on various subject-matter in relation to Pacific politics, including land reform, regionalism, geopolitics, and governance. He was a lecturer and senior lecturer at the University of Otago Politics Department for eight years, and was also co-director for the 48th and 50th Otago Foreign Policy schools. His current projects include New Zealand foreign policy in the Pacific, the geopolitics of the Pacific, and land reform in the Pacific.
Email contact – iati.iati@vuw.ac.nz

The woman who unseated Samoa’s prime minister of 20 years