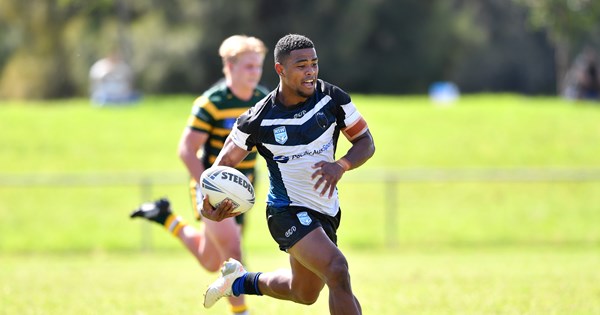 The Kaiviti Silktails and the Windsor Wolves could not be separated in a nail-biting 24-all draw at Mascot Oval that featured on NSWRL TV.

The first half of football showcased a gusty and physical style of play as both teams initially chose to run their sets through their forward pack only to be met by multiple defenders in each tackle.

The Wolves held onto the majority of possession early in the game with the Silktails defending their line on multiple occasions, without seeing any opportunities with the ball.

The first points of the game came as Windsor Fullback Shondre Lee-Silva sent his Winger Kyle Cassel over the line with a short pass. Cassel was unable to convert his own try and Windsor led 6-0 after just eight minutes.

The home team soon found their rhythm in attack as Centre Ratu inoke Vasuturaga broke through the middle of the Windsor defensive line off the back of a seven tackle set.

Despite squandering several try scoring opportunities, the Silktails soon equalised the score as Penioni Tagituimua sent to ball high into the air. Streaking through the defensive line, Maika Serulevu’s intense kick pressure forced his opponents to juggle the ball which was capitalised on by the second rower who scored the Silktails first points.

The visitors soon retaliated as the ball was grubbered from dummy half for lock Dallas Kings to ground just meters wide of the left goal posts. Cassel successfully converted and the Wolves led 10-4 after 23 minutes.

Having set up the first Kaiviti Silktails points for the game, Penioni Tagituimua managed to sneak in a try of his own, splitting the Wolves line to once again to even the score. Vuate Karawalevu successfully converted to bring the scores level in the 31st minute.

Unable to penetrate the Silktails line late in the first half, the Windsor Wolves chose to slot in a penalty goal to secure a slight 12-10 lead as the teams headed to the sheds.

The Kaiviti Silktails found the lead for the first time in the game early in the second half. Stepping out from behind the play-the-ball, Apimeleki Lutuimawi feigned a pass towards his right edge backs, opening the Windsor try-line defence for the Hooker to place the ball under the back dot. Karawalevu added the extras and the Silktails led 16-12.

As if reversing their first half roles, the Wolves didn’t see many attacking opportunities early in the second half, only to regain the lead during their first set within reach of the try-line. Five-eighth Brandon Smallwood capitalised on an unusual Silktails defensive lapse to score and Cassel added the extras to bring the score to 18-16.

Ratu inoke Vasuturanga snuck through to keep the home team ahead by one try as the Silktails spread the ball towards the left edge, seemingly for the first time in the game. Karawalevu again added the two points, pushing his side out to a 22-18 lead with just 20 minutes remaining.

After the Silktails chose to extend the lead by 6 points through a penalty kick, the Wolves ensured the game would go down to the wire, as Malakai Houma was rewarded for his strong second receiver runs throughout the game with a try five minutes from the final siren.

The Silktails home fans were on their feet during the dying minutes of the game as both teams literally fell short of their respective try-lines. Unable to capitalise on any of their final opportunities the siren sounded with the scores even.