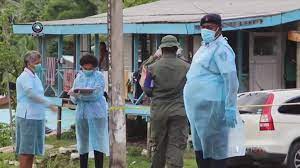 Fiji’s parliament has been forced to close as Covid-19 cases surge in the South Pacific country, overwhelming quarantine facilities and prompting calls for a nationwide lockdown.

After a staffer was found to be a close contact of a positive case, speaker Epeli Nailatikau said the legislative buildings in the capital Suva were shut.

“As a precautionary measure and out of an abundance of caution, the parliamentary precincts and offices will be closed with immediate effect,” he said in a statement .

Fiji went a full year without recording any community cases until April, when a second wave of infections hit. New cases have hit daily records, and an outbreak of the quick-spreading Delta variant, first identified in India, detected.

“New positive cases are being entered into home isolation, where feasible,” he said.

“Specific guidance has been provided for these individuals to ensure they do not have contact with other members of their households.”

Fiji’s largest hospitals in Suva have been converted into dedicated Covid-19 facilities, with field hospitals set up to treat non-virus patients.

Fiji successfully quashed community transmission of the virus last year with a series of tough border and movement restrictions.

But the government has resisted imposing a nationwide lockdown during the latest outbreak, concerned it will exacerbate poverty rates already elevated by the closure of international tourism.

Instead, it has relied on localised stay-at-home orders and ramped up vaccination efforts.

But the leader of the opposition NFP Party Biman Prasad said a nationwide lockdown was inevitable to contain the spread of infections.

“The longer we wait and numbers rise, the longer and more painful the lockdown will be,” he said. “This is not rocket science. This is common sense.”

Prasad said it was time for health professionals, not politicians, to lead the Covid-19 response. He also urged the government to set aside its pride and ask for help from Australia and New Zealand.

“Lives, health and incomes are at stake,” he said.

“This is a time to accept that we are not coping with the problem and to request help to bring the crisis under control.”

Senior government figures have said little as the crisis escalates but in an address over the weekend, Prime Minister Frank Bainimarama urged the country’s 930,000 residents to keep faith with his containment strategy.

“Covid-19’s hold over Fiji will dissipate. It will weaken and the light at the end of the tunnel will glow brighter and brighter,” he said.

Meru Sheel, an epidemiologist from the Australian National University, said the higher infection rate of the Delta strain may test Fiji’s health system.

“Health resources can be limited in some of the Pacific Island countries, which can make it a little bit more challenging to control the outbreak,” Dr Sheel said.

Dr Sheel said the closure of Fiji’s quarantine facilities was worrying, but that at-home isolation was possible.

“Most of it revolves around essentially allowing and creating a space for anybody who’s infected to be able to safely isolate,” Dr Sheel said.

“What we really want to do is protect the health system and … prevent people from getting hospitalised and dying from the disease.”

Sheel said case numbers fluctuate and the best way to determine a decline in infections is through a rolling average over seven or 14 days.

“There is no room for complacency. However as quickly as possible people need to be vaccinated especially public health workers,” she said.

Dr Sheel said it is imperative that health workers are protected and hospitals, that have been closed because of COVID-19 infections, are re-opened.

Many people caught within the government’s targeted containment zones said their food and other essentials are running out.

Muanikoso settlement on the outskirts of Suva has been under lockdown for three weeks, and its residents have staged protests to plead the government for extra support.

“If this current trend continues, we will be needing more than just food rations,” Milika Naulumatua, a Muanikoso resident said.