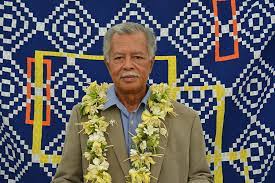 Pacific Islands Forum Secretary General Henry Puna has called for more answers and evidence-based science on Japan’s plans to dump more than a million tonnes of treated Fukushima wastewater in the Pacific.

In a statement released by the Forum Secretariat, the new Secretary General who has replaced former SG Dame Meg Taylor, told forum member officials it was his first appearance in the role.

He said the objective of the briefing with the Director General of the International Atomic Energy Agency (IAEA), Rafael Grossi, regarding Japan’s Decision to Discharge ALPS Treated Water into the Pacific Ocean, was to have “a very frank dialogue with the IAEA regarding the recent decision by our close partner, Japan. We, as a region, are entitled to clear answers, including evidence-based scientific assessments, which underpin the decision by the Government of Japan, which the IAEA has endorsed.”

The Vienna-based International Atomic Energy Commission had come out in defending the Japan announcement in April 2021, saying it was ‘technically feasible’.

But neither environmental groups in Japan and globally, nor Japan’s powerful Fishing Association, are convinced. Leaders of China, South Korea and Taiwan had also recorded their concern, and Pacific Forum members had sent out a ‘Hold off’ message in response to the Japan announcement in April.

Their concerns on lack of independent research, consultation and information to key questions have been echoed in the latest statement from the new Secretary General.

“This clarity will inform and advance our shared understanding of the full spectrum of impacts of Japan’s decision to discharge a large volume of treated nuclear water into the Pacific Ocean,” he said, pointing to the likely moves towards “further collaboration to seek access to other independently verifiable scientific environmental assessment.”

For the Pacific countries, the plans for treated but still radioactive wastewater to be dumped into their Oceans has triggered a wave of remembrance of nuclear testing across the region. The ‘nuclear legacy’ for the Pacific is far from positive. For decades the people of the Marshall Islands have advocated for more recognition of the impacts of the U.S testing programme on their future and set up a National Nuclear Commission to pursue their claims for nuclear justice. In March 2021, disturbing findings emerged, that France had concealed the true impact of its nuclear tests in French Polynesia. In the last year, the signatories to the South Pacific Nuclear Free Zone Treaty, also called the Rarotonga Treaty, have held their first meeting, raising awareness of their intentions to keep the Pacific Nuclear Free.

“Our 50-year history as the Forum has been overshadowed by our nuclear legacy issues, which continue to impact affected communities today, and we should not accept anything less,” Secretary General Puna noted in his statement, “As emphasised by our Leaders in 2019, the threat of nuclear contamination continues to be of significant concern to the health and security of our Blue Pacific Continent.”

The strong call and frank words from the Pacific were played down by the Director General of the International Atomic Energy Agency (IAEA), Rafael Grossi, who tweeted his enthusiasm for the briefing, without responding to the Pacific concerns.

He acknowledged the “work of the IAEA to support Members’ efforts in adopting and implementing the highest standards of nuclear non-proliferation safeguards. Indeed, the safeguards mechanism is a fundamental pillar of our very own Treaty of Rarotonga. As Parties to this Treaty, we take very seriously our commitment to leave for our future generations a nuclear free Pacific,” Puna said.

He noted the Pacific’s engagement with the IAEA spans many decades, “in view of the nuclear testing legacy issues that remain unresolved and that continue to pose serious environmental and health concerns for the Pacific.”

Whether the environmental and health concerns over the Fukushima wastewater will feature on the agenda of the next Japan-Pacific leaders meeting, known as the PALM, is unknown.

SG Puna referred to the PALM9 Senior Officials meeting, but there are no details yet on whether the PALM will address the issue.