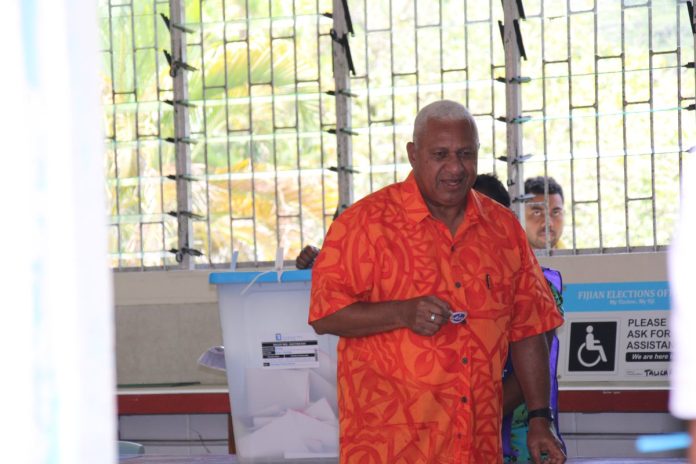 Democracy and the rule of law in Fiji are key U.S. interests amid growing concerns about China’s regional engagement

Fiji has become an integral part of the United States’ reengagement in the Pacific in recent years, including a visit to Suva from U.S Secretary of State Antony Blinken in February. Although Fiji is a small country by global standards, it is a regional leader in the Pacific due to its central location, relative size and international role on issues ranging from peacekeeping to climate change action. Fiji also houses one of only six U.S Embassies in the Pacific Islands, making it a hub for regional diplomacy.

In the last decade, Fiji’s elections have drawn scrutiny because of its history of coups — but the recent election on December 14 received even greater international attention amid growing strategic competition between China and the United States and its regional partners, Australia and New Zealand.

Prime Minister Frank Bainimarama announced on 22 December that the military has been deployed to maintain “law and order” after his party lost its majority in the election and appeared to be losing power after a coalition formed behind his main political rival, Sitiveni Rabuka, who has called for him to concede.

Bainimarama has led the country for the last 16 years, coming to power in a coup in 2006, and subsequently winning democratic elections in 2014 and 2018. Rabuka also led two coups in 1987 before being elected prime minister in 1992.

On December 20, the People’s Alliance Party secured the support of SODELPA, forming a coalition along with the National Federation Party to supplant FijiFirst’s majority. Rabuka, whose name is pronounced with an “m” in the first syllable like his nickname “Rambo,” thanked election officials and the Fijian people, promising “change” in the country.

Fiji’s election was watched by the Multinational Observer Group — an organization made up of 16 countries, including Australia, the largest donor to the South Pacific — as well as the Pacific Islands Forum and the Melanesian Spearhead Group, which found that the election was free. USAID, through its partnership with the Pacific Community, also supported the Fiji Election Office to conduct voter education and improve the election’s accessibility.

Although the vote was peaceful and observers did not find irregularities, it was not without controversy. On election night, the online app used to post results was abruptly taken offline. After the glitch, Bainimarama replaced Rabuka in the lead. This led Rabuka to call for a halt to the vote count until the Republic of Military Forces could ensure the process was fair — a request which the military denied (The 2013 Fijian constitution gives the military the right to intervene in national politics). Rabuka was then taken into police custody and questioned, although he was not charged.

Bainimarama has defined Fiji’s politics for decades, but his support was dwindling even before this election: FijiFirst’s share of the vote fell from 59.2 percent in 2014 to just 50.02 percent in 2018. Bainimarama’s popularity was reduced further by the damage of the COVID-19 pandemic on tourism, which accounts for 39 percent of national GDP. Fiji’s economy contracted by 19 percent in 2020, and more than 115,000 Fijians — roughly one in eight — lost their jobs over the next two years. Grievances also mounted due to political controversies and the erosion of civil liberties.

With the election at an end, the next test of Fiji’s democracy will be the peaceful transfer of power — a concern for many Fijians in recent months that has only grown further with Bainimarama’s refusal to concede and deployment of the military. Bainimarama cited ethnic tensions and violence as a justification of the military’s involvement, but others dispute that ethnic tensions have manifested themselves in this election.

Ethnic tensions between the Indo-Fijian minority and indigenous iTaukei — though they have eased in recent years — have played a role in past coups. Rabuka led coups in the name of returning the country to iTaukei, whereas Bainimarama led his coup in 2006 in the name of a multiracial Fiji, and, ironically, good governance.

On 21 December, FijiFirst General Secretary and the government’s caretaker Attorney-General Aiyaz Sayed-Khaiyum called into question the validity of the coalition between the People’s Alliance, the National Federation Party and SODELPA. He pointed to internal disagreements in SODELPA over its decision to join the coalition, and said the next prime minister of Fiji would be determined on the floor of parliament.

Despite Fiji’s democratic elections in 2014 and 2018, Freedom House classified the country in 2022 as “partly free,” noting that while freedoms have improved since 2014, Bainimarama’s government “frequently interferes with opposition activities, the judiciary is subject to political influence, and military and police brutality is a significant problem.” A 2021 U.S. government report on human rights in Fiji also cites restrictions on freedom of expression, the press and the right of peaceful assembly. In 2021, nine opposition figures, including Rabuka, were arrested for criticising government legislation.

Rabuka’s win — if he can maintain his coalition — marks the first time in more than two decades that the country has changed its leadership through an election in what appears to be a promising sign for Fiji’s democratization. However, the election of another former coup leader also signals that Fiji has not left behind its strongman political culture. Even if there is a peaceful transfer of power — which is not guaranteed — it remains to be seen how freedom and human rights would change under Rabuka’s leadership.

What is at Stake for the United States?

In September, President Joe Biden hosted the first-ever U.S-Pacific Islands Summit, the latest U.S effort to strengthen ties with the region amid growing competition between China and the United States and its partners. In July, Vice President Kamala Harris gave a virtual address at the Pacific Islands Forum (PIF) in Suva, announcing plans for greater U.S diplomatic presence in, and funding to, the region.

Given Fiji’s leadership role in the Pacific and as host to the Pacific Islands Forum Secretariat, U.S. relations with Fiji will be a central part of Washington’s reengagement. Political turmoil in Fiji would present difficult dilemmas for the United States and its partners, who wish to avoid pushing it closer to China.

After Bainimarama’s coup in 2006, Australia, New Zealand and the United States imposed travel bans on Fijian government officials and suspended security assistance and direct financial assistance to the country. Fiji was also expelled from the Commonwealth and the PIF. In 2014, when Bainimarama was democratically elected, Fiji’s relations with the Commonwealth, Australia, New Zealand, the United States and the PIF were normalized.

But Fiji was largely cut off from its traditional partners for eight years, during which time Bainimarama pursued a “Look North” policy that emphasized closer relations with China and other countries. China increased its aid to Fiji from US$1 million in 2005 to US$167 million in 2007 — more than half of Beijing’s annual aid to the Pacific Islands at the time. Fiji also received much of its police training from Beijing in the aftermath of the coup.

In light of this, some coverage the 2022 election has framed Bainimarama as a pro-China candidate and Rabuka as the opposite. In August, Rabuka ruled out signing a bilateral security pact with Beijing if elected, probably seeking to reassure regional partners concerned about China’s engagement. But Beijing has not proposed such an agreement with Fiji, and if it did, Bainimarama would also be unlikely to sign. Even during the post-coup years, as Fiji’s ties to China grew, Bainimarama sought to diversify Fiji’s foreign partnerships; he signed a security agreement with Australia in October.

The lesson of Fiji’s post-coup years is that an undemocratic and isolated Fiji gives Beijing more avenues to exert its influence. The United States’ Pacific Partnership Strategy states that a key interest is supporting good governance and human rights in the Pacific Islands, which — in addition to making the region more peaceful and prosperous — will help stem China’s influence. This also underscores that while the United States has an interest in countering China in the Pacific Islands, often the best way to do so is focusing on the needs of the countries themselves. A smooth political transition would allow Fiji and the United States to continue to strengthen their bilateral relations and partnership in the Blue Pacific

SOURCE: US INSTITUTE OF PEACE/PACNEWS