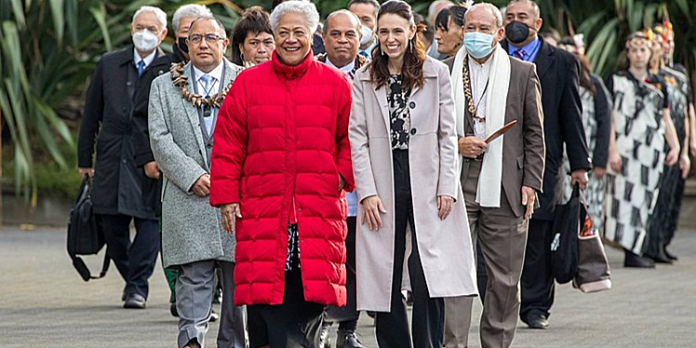 Samoa and China do not have any plans for military ties, Prime Minister Fiamē Naomi Mata’afa says.

Mata’afa who is on a three-day trip to Aotearoa is making her first official bilateral trip abroad since becoming leader last year.

Her visit marks 60 years of diplomatic relations between New Zealand and Samoa and the 60th anniversary of Samoa’s independence.

At a media briefing after talks with New Zealand Prime Minister Jacinda Ardern, Mata’afa said: “There are no discussions between Samoa and China on militarisation at all.”

She said the Pacific nations would discuss China’s security proposals at the Pacific Islands Forum due to take place from 12 July.

“The issue needs to be considered in the broader context,” she said.

Ardern said there was capability in the region to deal with security issues and they could be addressed together, while stressing that Pacific nations still had the sovereign right to decide their own future.

“We have convergence on our regional priorities,” Mata’afa said, adding that Samoa believed in the region taking a collective approach to issues.

She said the anniversary of the Treaty of Friendship signed by the two countries would coincide with Samoa opening its borders fully on 01 August.

The talks with Ardern had covered a lot of ground, she said, and the two countries would work together on tourism, education and in other economic areas.

“Targeted assistance from New Zealand has enabled us to open our borders.”

From 01 August flights to Samoa would increase from the current weekly flight for passengers to daily flights by the end of the year.

Her message to Samoans living in New Zealand was that the anniversary celebrations will take place over 12 months so they had plenty of time to come home.

Asked what Samoa required of New Zealand, Mata’afa said “she was not in a rush to come up with a shopping list.”

Instead it might be time just to reflect on reprioritising issues while saying climate change and education remained important as well as “building back stronger” after Covid-19.

On the subject of seasonal workers, which Samoa has “slowed down”, she said the New Zealand scheme was well run. But there were some concerns and Samoa was noticing the impact of the loss of workers in its own development sectors.

Originally it was intended to send unemployed workers to Australia and Aotearoa for the RSE programme, but now the civil service and the manufacturing sector in Samoa were being hit by experienced employees leaving.

“We need to have a bit more balance,” Mata’afa said, adding that the new government wanted to hold new talks with both the Australia and New Zealand governments on the issue.

“When we all live together it’s important to settle grievances and differences,” she said.

Ardern said the visit has come at a special time for the two countries, referring to the Treaty of Friendship and Samoa’s 60th anniversary.

She announced the launch of a special fellowship in Fiamē Mata’afa’s name and the New Zealand prime minister’s award plus the start of new sports leaders’ awards with an emphasis on women and girls.

Discussions had covered their shared experiences on Covid-19 with Ardern praising the high vaccination rates among young Samoans.

Climate change had also been discussed and New Zealand will increase funding for Samoa’s plans to tackle it.

On her arrival at Parliament Tuesday, Fiamē Mata’afa invited Ardern to Samoa to take part in the independence celebrations next month and she repeated the invitation at the media briefing.

Mata’afa’s visit comes ahead of the Pacific Island Forum meeting.

After welcoming Fiamē, Ardern acknowledged the importance of that meeting which will discuss issues like climate change and the current “strategic” situation across the Pacific.

China’s growing presence in the Pacific is among topics sure to be covered by the two leaders during their talks.