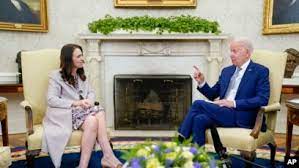 Speaking from the Chinese capital, foreign ministry spokesperson Zhao Lijian accused the two leaders of trying to “deliberately hype up” issues from the South China Sea to Beijing’s ongoing push for influence in the Pacific.

“China’s security is not aimed at third parties, nor is intended to establish military bases. The U.S and New Zealand joint statement hyped up relevant problems with ulterior motives, created false information, and smeared China,” he said.

After their meeting at the White House on Wednesday, Ardern and Biden said they shared concerns that the establishment by China “of a persistent military presence in the Pacific” would “fundamentally alter the strategic balance of the region and pose national security concerns” for both nations.

Beijing claims the comments are hypocrisy, saying the US “has military bases all over the world, yet it expresses concerns about normal security cooperation with other countries”.

“China has been active in the Pacific for a very long time, and it’s really important that New Zealand retains its approach which is to be consistent, predictable, and respectful in the way that we work with China because our relationship has matured,” she said.

Mahuta said leaders in the “contested” region say the key issues facing them are climate change and economic resilience, rather than security.

China’s foreign minister has been on a 10-day, eight-nation mission across the Pacific, but Wang Yi was unable to firm up support for a sweeping region-wide economic and security agreement in a meeting of leaders on Monday.

He has managed to sign bilateral agreements with several countries as he island-hopped around over the past week, with Papua New Guinea and Timor Leste his final visits.

Massey University security and Pacific Islands academic Anna Powles says leaders have sent a “strong message” to Beijing that they’re worried about the substance of its plans, but she anticipates the Chinese government will press on.

“They have invested a great deal of diplomatic capital into this and so I think we can expect them to keep pursuing it,” she told ABC News.

Pressure on New Zealand to firm up its response to China in the region hasn’t been helped by Australia’s new foreign minister Penny Wong making her second trip to the Pacific in less than two weeks, dashing to Samoa and Tonga on Wednesday night after an appearance in Fiji last week.

“We understand that we need to work together like never before, for our peoples and for generations to come,” Wong said.

Foreign Minister Nanaia Mahuta says plans are in the works for her own trip, but she pointed out that she and Defence Minister Peeni Henare flew out to Suva when the border opened in late March.

Mahuta said she didn’t need to “rush” to the Pacific because of long-standing ties, and welcomed Australia’s renewed engagement.

“She is a new minister, from a different government,” Mahuta emphasised, “she has to establish new relationships across the globe.”

When questioned about why she isn’t visiting in response to China’s Pacific push, Mahuta said “we don’t need to react in a way that looks desperate about the relationship.”

The foreign minister will attend the Pacific Islands Forum later this year.