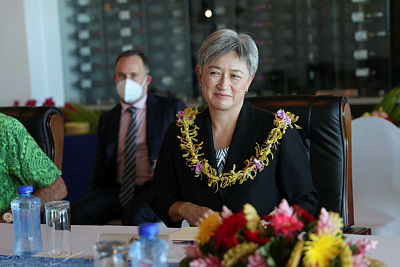 Australian top diplomat Penny Wong is embarking on her third international trip since being sworn in as foreign affairs minister and will travel to two more Pacific countries – Samoa and Tonga – as Australia and China vie for influence in the region.

Before boarding her flight on Wednesday evening, Wong said Australia would “increase our contribution to regional security” and work together with Pacific countries “like never before”.

Wong has placed a heavy emphasis on building stronger connections with Pacific countries, whose leaders have repeatedly said action on the climate crisis is a bigger priority for them than geopolitical rivalries.

On a two-day visit to Fiji last week, Wong said Australia wanted to show it was a reliable and trustworthy partner to Pacific countries and was “determined to make up for” what she described as “a lost decade on climate action”.

After the Albanese government’s first meeting of the full ministry on Wednesday, Wong said she would fly to the Pacific again to “renew and strengthen Australia’s deep ties of friendship and family”.

“I look forward to listening to leaders in Samoa and Tonga about how the Australian government can best apply the new energy and resources we are bringing to the Pacific,” Wong said in a statement.

“We understand that we need to work together like never before, for our peoples and for generations to come.” 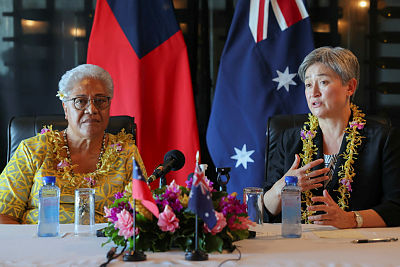 Wong said the government was focused on making “a uniquely Australian contribution to help build a stronger Pacific family”.

That would include social and economic opportunities including pandemic recovery, health, development and infrastructure support, as well as through Pacific labour programs and permanent migration.

Wong joined the prime minister, Anthony Albanese, at the Quad summit in Tokyo on Tuesday last week, where she also met with her counterparts from the US, Japan and India.
After her forthcoming visit to Samoa and Tonga, she will return to Australia, before flying with Albanese to Indonesia on Sunday.

In a sign of the growing competition for influence in the region, China’s foreign minister, Wang Yi, is also in the final stages of a marathon eight-country visit to the Pacific.

In a setback for China, Pacific countries declined to sign up to a sweeping regional economic and security deal proposed by Beijing, after a crucial meeting of Pacific foreign ministers and their Chinese counterpart on Monday.

Pacific journalists have raised concerns about a lack of transparency about the Chinese foreign minister’s trip.

The new Australian government wants to persuade countries in the region to view Beijing’s offers of security assistance with scepticism – and consider consequences for their sovereignty 10 years down the track.

An op-ed in the state-run China Daily urged the Albanese government to “give serious thought to the choice between repeating his predecessor’s mistakes and acting as a mediator between the U.S and China”.

The article said while the election had “created the chance for Australia to adjust its China policy”, the space for such movement was “quite limited, as both the ruling and opposition parties blame the souring bilateral ties on China”.

“China’s friendship with Pacific Island countries has been open, above board and has stood the test of history and the times,” a spokesperson for the embassy said.

“China’s cooperation with Pacific Island countries does not target the third parties and does not seek exclusive rights.”

The embassy spokesperson said China was “willing to enhance communication with all countries that care about Pacific Island countries, especially Australia and New Zealand”.

In a second statement issued later on Wednesday, the Chinese embassy denied that China was competing with Australia for influence, and said it had “no intention to establish military bases” in Solomon Islands.

“China respects Australia’s historical and traditional ties in the region and there is enough space in the vast Pacific Ocean for China, Australia and all island countries to share peace, development and prosperity,” it said.

During the election campaign, Labor characterised the signing of a security deal between China and Solomon Islands on Scott Morrison’s watch as the biggest Australian foreign policy failure in the Pacific since the second world war.

Morrison had maintained that China was exerting “enormous pressure” on Pacific Island countries.

The new defence minister, Richard Marles, said on Wednesday it was “not within our power” to block countries from striking agreements with China but “what’s within our power is to be building our own relationships with the Pacific”.

“We become the natural partner of choice if we do the work,” Marles told the ABC.

In an interview with Sky News, Marles said China had “sought to shape the world around it under president Xi in a way that we have never seen before, and that presents enormous challenges for us”.

Labor has pledged to increase Australia’s 2030 emission reduction target to 43% compared with 2005 levels but regional leaders would also like to see curbs on coal and gas projects and fossil fuel exports.

At the 2019 Pacific Islands Forum, Tuvalu’s then prime minister, Enele Sopoaga, described how the talks almost collapsed twice amid “fierce” clashes with Morrison over Australia’s “red lines” on climate change.

On Monday, the secretary general of the Pacific Islands Forum, Henry Puna, called on “China and our international partners, to submit enhanced nationally determined contributions in line with the 1.5C pathway and net zero by 2050”. China currently is committed to net zero by 2060.