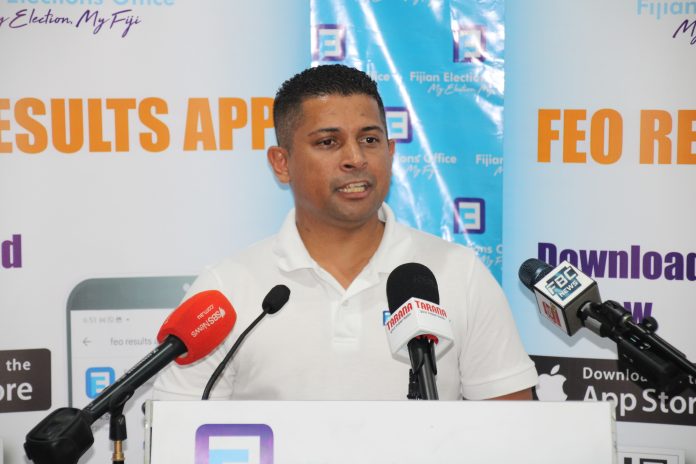 In a press conference Thursday, Saneem highlighted that there have been inaccurate statements made by the parties.

Saneem clarified that the counting of votes is manual.

“Anybody calling for a manual count in Fiji, tell me what else can I do to make it more manual than that? What else do you want me to do? There is absolutely nothing else you can make more manual. It’s the same counting process from the history of elections in Fiji. People picking up ballot papers and saying 1, 2, 3, 4, 5. So ladies and gentlemen with all due respect to everybody who’s been making statements, I urge you to ensure that your statements are filled with accuracy.”

The Supervisor of Elections said he has nothing to hide in regards to the electoral process.

Saneem was responding to National Federation Party (NFP) leader, Professor Biman Prasad who claimed that the Fijian Elections Office does not provide the protocol of results directly to the political parties so that the parties can do their own tallying and counting of ballots.

Saneem queried this statement saying that no NFP agents are present at the FEO Results Centre.

“You are entitled as a political party to have an agent at the Results Centre. Every political party has their own laptop, they can bring their flash drive and they will be given data directly from the results management system as well as the scanning of all the results that have been entered into the software.”

Saneem said the People’s Alliance is the only political party to have downloaded copies of the protocol of results, which was released in the first set of results earlier Wednesday.

“And right there in that press conference, I saw that the People’s Alliance failed to inform you that they already have this (protocol of results). This is the result.”
He also called on political parties to come up with evidence as there has been none so far.

Saneem said he has not received any official complaint from political parties who are raising their concerns about the FEO app glitch and the provisional results.

The People’s Alliance, National Federation Party, the Fiji Labour Party and the Unity Fiji Party has questioned the credibility of the electoral process.

Saneem said once he receives the complaints then will act on it.

So far, the political parties have only made their complaints to the media.

A number of political parties are calling for an intervention into the electoral process until an urgent forensic audit of the election system is conducted.

Solomons PM due in Australia amid China tension

Timor-Leste set for presidential run-off election in April after neither candidate...