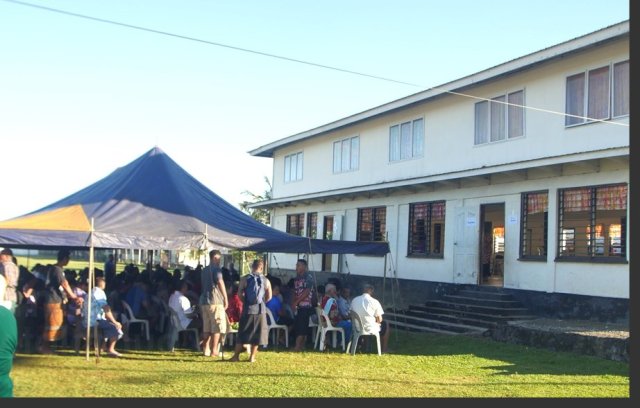 In a fine sun shiny Samoan day, 120,000 voters go to the polls today to elect a new government following months of intensive and unprecedented campaigning.

The ruling HRPP led government of 40 years is facing a real challenge by the seven month old FAST Party led by a former Deputy Prime Minister and former Speaker who left the HRPP ranks on major issues of principle.

HRPP has wooed the voters, (half of whom had known no other political alternative in forty years) on its work.

FAST on the other hand, pushed home the real need for change given the threat to the rule of law and governments failures such as the handling of the measles epidemic in 2019 where a hundred people, mainly babies, died.

Pre-polling for the last four days, posted a very close result with HRPP holding 25 seats, FAST 21, Tautua 1, Independents 1 and 1 seat is a tie between HRPP and FAST.

Of the 8,000 people registered for the pre-polling since Monday, 580 did not vote, however, they have a chance to vote in today’s general election.

After the final count of the last four days pre-polling, 7420 did cast their vote.

Like no other, there has been much hype in the lead up to this general election with political parties taking campaigns to a totally new level.

There has never been such strong feedback from voters in support of their political parties and the Samoan diaspora overseas had made their voice known by supporting FAST and donating funds in a bid to vote in a FAST led government.

Campaigning by both parties took to social media and a strong voice of the Samoans abroad, who due to the pandemic, could not travel over (for those qualified) to vote.

Polling booths open at 9am and close at 3pm today. The votes are counted and preliminary results announced in each polling booth to be released officially by the Commissioner of Elections later tonight.

The final count is on Monday next week.

While 51 seats are notionally up for grabs, Mata’afa is one of only three MPs whose passage into Parliament is already assured: no one is challenging the former Deputy Prime Minister for her Lotofaga seat.

Pre-polling has been conducted across four days this week, a first for a Samoan election, allowing for the release of very preliminary figures about candidates’ vote tallies.

The release of the early figures tallies has prompted debate about their significance (pre-poll voters in total only represent about 6.5 per cent of Samoa’s total election pool).

Mata’afa, who has been in Parliament since the age of 28 after being elected in 1985, said she is not sure yet how much weight to give the results of early votes.

“We are trying to assess how useful an indicator it might be for the main election,” she said.

“You could read all sorts of things into the numbers but I think we need to have a look at it overall and see how it might be useful as an indicator.

“We’re essentially looking at old people, people with disabilities, and those travelling so that in the vast majority of the voting population, one big group would be the youth.”

After this week’s pre-polling, for which about 8,500 voters are eligible, about 115,000 voters (from the all but three uncontested constituencies), will cast their ballots on Election Day.

“In terms of the actual candidates, I think it would be a fair comment to say most people are focusing on the main event tomorrow (Friday),” she said.

“I don’t want to make any predictions.”

Mata’afa said she was not particularly focused on any particular constituencies in the final hours before the national poll.

After her last-minute campaign drive concluded, she will join FAST party analysts at the party’s Maota Samoa headquarters on election night, where she says will monitor the performance of the party’s candidates across the board.

“I am following everyone. For us as a party, every single win will count so we are looking at all our people,” she said.

“With the elections, you are never quite sure so you take your wins where you find them.”

She said no matter what result is delivered on Friday, Samoa’s governance system will have been changed for the better.

“Our party’s particular role will be determined by how the country votes tomorrow (Friday),” she said.

“Whichever way it goes it’s going to be different going forward in terms of Government because FAST has brought in an element that has been missing for quite a long time in terms of challenging the HRPP.

“Whichever way it goes, the commitment is there to serve the country in whichever capacity, and that goes for the party as well of course.”

This is the first election in that Samoa has conducted early votes for eligible constituents. Mata’afa said it is something she would like to see repeated but without dragging it out for too long.

She said four days are too many for around 8,500 people to vote and have their votes announced before the big day.

Mata’afa said there is value in early-voting but that perhaps for a number of eligible voters so small one day would have been enough.

“It’s been quite a big outlay for the Government to have four days putting out all the personnel and infrastructure to run this for a very small number of voters,” she said.

“It’s quite a large expense. I was wondering if they did feel pre-polling was a good idea, especially for the elderly and the disabled and people who might be traveling, whether it might have been better to have one day rather than say four.”