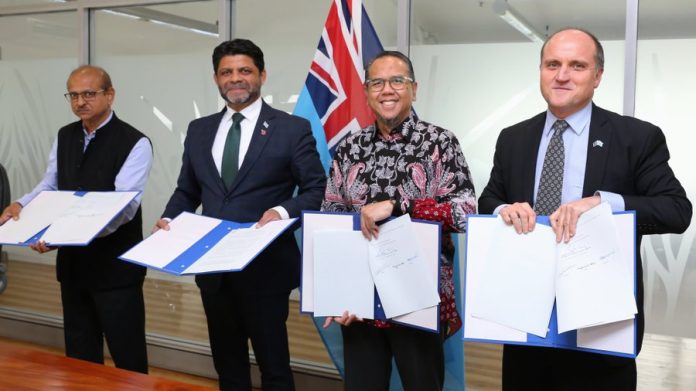 Fiji’s Attorney-General and Minister responsible for Elections Aiyaz Sayed-Khaiyum has reassured Fijians that the “2022 General Election will be held in the not too distant future”.

While signing the terms of reference for the Multinational Observer Group (MOG) with Australia, Indonesia and India Tuesday, he said the independent international observer group would be in the country to observe the polls and provide comments at the end of the elections process.

“We’ve invited different countries that want to participate, but there is no limitation on the number of observers,” he said.

“Obviously the co-chairs are here, last time the secretary was provided by Australia, they need to get accreditation through the Fijian Government, but it’s open.

“It has to be handled overseas with the secretariat.”

Sayed-Khaiyum said the MOG would liaise and work closely with the Electoral Commission as well as the Fijian Elections Office.

“The terms of references will be available publicly on the elections office webpage.

“It’s similar to what we had the last time, it is essentially the same.”

Australian chargé d’affaires John Williams said his government was delighted to continue to build a strong partnership with the Government of Fiji.

“An important part of that is to continue to support Fiji’s democratic process and systems including its electoral system,” Williams said.

“We are happy to be part of it and looking forward to establishing a secretariat and having some observers from Australia come for the elections.”

Meanwhile, Supervisor of Elections Mohammed Saneem says the Prime Minister “simply spoke on whatever is the process until the writ is issued” when he made comments about the Fijian Elections Office in relation to the 2022 General Election date.

He was responding to PM Voreqe Bainimarama’s comments during the launch of the 2022-2030 iTaukei Affairs Strategic Development Plan in Suva on Monday that the announcement of the election date would depend on the work of the Fijian Elections Office.

Bainimarama said people, including him, were eager to know the election date, but the FEO was yet to wrap up its work.

“We all want to know the day of elections, but FEO has not completed their work,” he said.

He said the FEO was still conducting voter registrations and they would decide a date once that was completed.

Saneem said the FEO would continue to register voters until the writ was issued.

“As we continue to progress into the elections period and into the campaign period, further, more and more Fijians become entitled and eligible to register as they are turning 18,” Saneem said in response.

“Therefore, this means the FEO will continue to conduct registrations until the day is announced and the writ is issued.

“So the PM simply spoke on whatever is the process until the writ is issued,” he said.

Labor leader Anthony Albanese to be sworn in as Australia’s new...