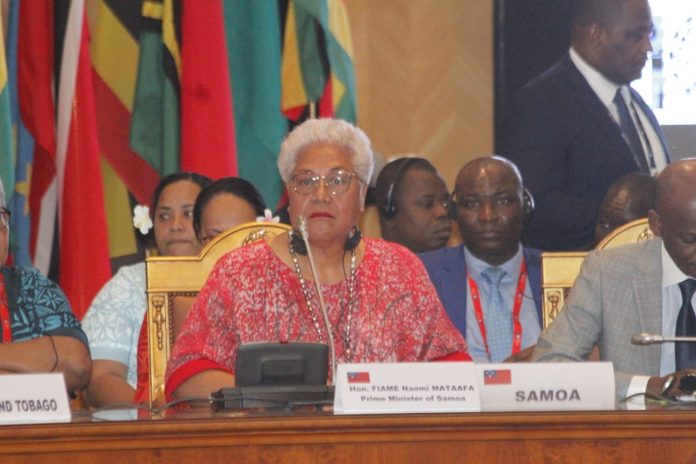 By Pita Ligaiula, in Luanda, Angola

She made the remarks while addressing the 10th Summit of the OACPS Head of State and Government Friday in Angola’s capital Luanda.

“And likewise for the wider membership of the OACPS –SIDS, LDCs and LLDCs. We must collectively demand all countries, especially the big emitters, to make rapid, deep and sustained reductions in emissions to keep the 1.5 degrees goal alive.

“For us in the Pacific, if we are not on track to meet the 1.5 degree goal, much of our development efforts will continue to be reversed. The window to secure a liveable future for us, is closing faster than for everyone else,” said PM Mata’afa.

As OACPS, a united stance in the global arena through implementation of relevant decisions is key, she said.

“Such as, the support by the OACPS of the Pacific Islands Forum Leaders Declaration on Preserving Maritime Zones in the face of Climate Change-related Sea-level Rise.

“This is a priority for the Pacific, and with 64 of OACPS’ members who are also coastal states, we must catalyse the initiative to work collectively, to build wider international support, including through adoption of similar practices to create a global norm for preserving maritime zones,” Mata’afa said.

PM Mata’afa also welcomed an OACPS Leader’s commitment to adopt the United Nations General Assembly Resolution for an Advisory Opinion from the International Court of Justice(ICJ) on Climate Change, initiated by the Vanuatu Government.

“Again, this demonstrates the value, uniqueness and potential of the OACPS to become a powerful and united political bloc in various multilateral processes and settings.

“This will need to be assessed and explored, within the context of the revised Georgetown Agreement, as will be the need to secure other strategic partnerships for our sustainable development,” said PM Mata’afa.

On Ocean, PM Mata’afa said the ocean is central to their identity, their livelihoods, and their future as large ocean States.

“The Ocean also unites us as OACPS. It sustains us and the world. A resilient ocean means a resilient plant and a resilient OACPS. We must protect preserve and sustainably use the ocean and the resources therein. Marine pollution including plastics must be curbed and eliminated.

“We also seek greater economic development especially in the wake of the COVID 19 pandemic which devastated tourism–dependent economies for all the Pacific.

“We need better protection for our oceans and fisheries resources, including bolstering local capacity to combat Illegal Unreported and Unregulated fishing. Optimising our OACPS strength in our engagement at the WTO and in multilateral financial institutions can bolster our efforts in supporting our development aspirations,” she said.

Mata’afa also said their access to concessional finance is a necessity if they are to achieve their rebuilding efforts.

“The choice between rebuilding our economies and servicing our debts is an immediate and urgent dilemma.

“No country can pursue their sustainable development goals and be expected to also pay for their debts. The multidimensional vulnerability index provides a window to access concessional financing and must be supported,” she explained.

PM Mata’afa said their high-level response lies in the implementation of the 2050 Strategy for the Blue Pacific Continent, endorsed by Pacific Islands Forum Leaders in July this year.

“Its long-term vision, values and thematic priorities to ensure sustainability and a resilient Pacific region of peace, harmony, security, social inclusion and prosperity; resonate with the strategies of the OACPS.

“We are convinced, that we are stronger together. As OACPS, we must seize this opportunity to define and build a resilient and sustainable future for our peoples and places, because it would be remiss to underline there is nothing meaningful about us, without us.

“The Pacific alone can make a huge difference. And we have. But the Blue Pacific, Africa and the Caribbean together, with the help of our partners, we can be transformational and unstoppable,” said PM Mata’afa.